Remarks By President Buhari At The Commissioning Of MMIA New Terminal 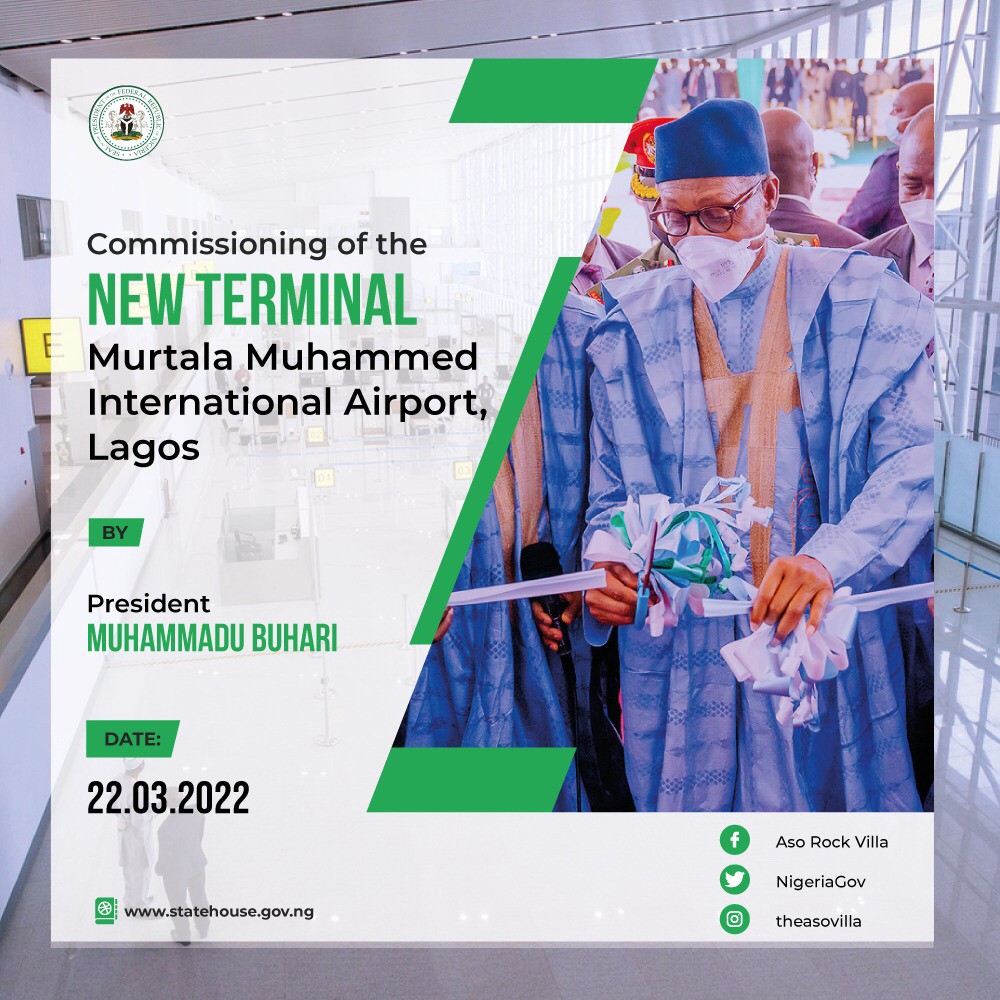 REMARKS BY HIS EXCELLENCY, MUHAMMADU BUHARI, PRESIDENT OF THE FEDERAL REPUBLIC OF NIGERIA AT THE COMMISSIONING OF THE NEW INTERNATIONAL TERMINAL OF MURTALA MUHAMMED AIRPORT,LAGOS,
THE 22ND MARCH, 2022

​It is with great pleasure that I am here today to perform the official commissioning of the newly constructed Terminal Building at the Murtala Muhammed International Airport, Lagos.

This event is an eloquent testimony to the strong commitment of our administration to the development of world-class infrastructure across all sectors of the Nigerian economy.

Our continuous investment in the building of long lasting infrastructure in the aviation, road and rail transportation, agriculture, telecommunications and other critical sectors is yielding massive results, and the people of Nigeria are now increasingly attesting to benefiting from the associated dividends.

Starting from the year 2015 when we commenced our first tenure in office as a government, we have been deliberate and consistent in identifying and investing in critical projects that would improve the standard of living of our people, as well as contribute immensely to our growth and development as a nation.

Despite obvious limitations in terms of availability of resources, our investments in inter-state rail connectivity, road networks, agriculture, power and telecommunications, just to mention a few, have been unprecedented.

Bearing in mind the importance of airport infrastructure as a catalyst for economic growth, Foreign Direct Investment and development globally, this administration decided to prioritize the completion and delivery of five brand new international terminals, which were at 11% completion level when we came into power in 2015.

This aligns perfectly with our Aviation Roadmap, which was developed in 2016, for the purposes of establishing critical infrastructure, including a National Carrier, Maintenance, Repairs and Overhaul Centre and improved Airports Terminals through concession, to boost aviation practice and take the industry to the next level, reflecting global standards.

We have also complemented these robust initiatives with specific fiscal policies to drive aviation infrastructure renaissance.

These include the designation of 4 airports, namely Lagos, Abuja, Kano and Port Harcourt as Free Trade Zones, in which customs duty is not applicable; removal of VAT on all forms of shared transportation, including air transportation; and exemption of commercial aircraft and spare parts from VAT payment.

The one in Kano has also been completed, and will be commissioned soon, while work continues apace to complete that of Enugu shortly.

I, therefore, congratulate all Nigerians on the successful completion and commissioning of the Terminal Building at Murtala Muhammed International Airport, Lagos our premier airport.

I am confident that the new terminal, with sixty-six check-in-counters, sixteen Immigration desks at arrival, twenty-eight Immigration desks at departure, and eight security screening points, among others, will go a long way in contributing to the socio political and economic prosperity of our great nation.

This improvement will increase airport operations and management services to about 14 million passengers per annum, with the attendant positive multiplier effects, by creating about 3,000 direct and indirect employment opportunities for our youths, increased inflow of Foreign Direct Investments and exponential growth in the Gross Domestic Product.

As the approved Aviation roadmap is being implemented, we begin to experience an unprecedented growth of the sector, putting pressure on the infrastructure and making business inefficient. If nothing is done, the growth will be stunted and all the opportunities lost.

Government is responding by further investments and partnerships in the sector to tend to this challenge. Consequently, the Minister of Aviation has been directed to fast track the airport concession programme. Similarly, the Abuja second runway is being fast tracked. The Minister of FB&NP has been directed to source special funding for the project while the MFCT is directed to conclude the titling of the approved 12,000 hectares of land to accommodate the runway and other developmental projects

Let me express my deepest appreciation to our partners on this project, the Government and People of the Republic of China, through the China Export-Import Bank and CCECC Nigeria Limited, for their commitment and support towards the completion of this infrastructure.

Let me also commend the Federal Ministry of Aviation and its agencies, particularly, Federal Airports Authority of Nigeria, for working assiduously towards the realization of the project.

With the delivery of this project, a new era of safety, security, and comfort has been ushered into the Nigerian aviation industry, and I am persuaded that it will get better with the passage of time.

On this delightful note, I hereby commission the new Terminal Building at Murtala Muhammed International Airport, Lagos, and flag off its official commissioning.

​I thank you all and may God bless the Federal Republic of Nigeria.

VAT Should Be Collected By State Government – Mr Taiwo Oyedele