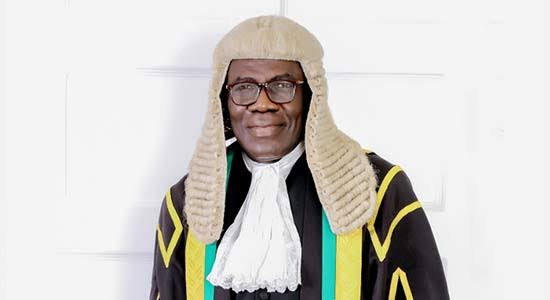 Hon. Justice O. Taiwo has charged the Judges to be up to the task whenever a fundamental human rights case is brought before them.

He said this at a lecture organised by the Human Rights Committee of the Nigerian Bar Association, Lagos State Branch titled “Fundamental Reflections on Delivering a sound Human Rights oriented judgments” held at The Muson Center, Lagos.

According to Hon. Justice O. Taiwo (Rtd) “There is no doubt that the judge must be abreast of the law and the decisions of the superior courts. The advocates appearing before the court as ministers in the temple of justice also play a vital roll.”

Read the full Statement below;

I thank the organisers of this summit which is in commemoration of International Human Rights Day, 2022. I am very passionate about human rights not whilst on the bench of the Federal High Court but as a legal practitioner and a bar man who had been the Chairman of this branch of excellence, the Lagos Branch. Having been raised from the Bar to the Bench, I am indeed in a privileged position to see two sides or angles of the legal profession. I hope am able to make an impact as expected by the sponsors and admirers on the topic. The branch under its past chairmen had been in the forefront of the fight and advocacy for the entrenchment of the inalienable rights of men. I therefore pay glowing tributes to our chairmen, both living and those that are no longer with us in this terrestrial world for their exploits in making sure that the candle of the fight for human rights is not extinguished. I salute the current Chairman of the branch, my friend and brother, Ikechukwu Nwana Esq, all the members of the executive and members of the human rights committee. Human Rights Committee, is a very important standing committee of the Nigerian Bar Association which is replicated in all branches as a matter of constitutional provision in the NBA Constitution. It is one committee that is central to the purpose of the NBA itself. It is a committee which is chaired constitutionally by either the 1st Vice-President of the NBA at the national level or the Vice Chairman of a branch of the NBA. Human Rights are recognised all over the world to the extent that the United Nations passed an International Bill of Human Rights known as Universal Declaration of Human Rights in 1948. The declaration expressed in terms that are not political, sets out the treatment that every one in the world will be able to expect as a member of the human congregation. There are other instruments that have evolved over the years touching on the rights of peoples all over the world which must be respected by the various governments irrespective of the type of political system. These are for example, International Covenant on Civil and Political Rights, International Covenant on Economic, Social and Cultural Rights, International Convention on the Elimination of All Forms of Racial Discrimination, Convention on all Forms of Discrimination against Women, Convention against Torture and Other Cruel, Inhuman or Degrading Treatment or Punishment, Convention on the Rights of the Child, International Convention for the Protection of All Persons From Enforced Disappearance, Convention on the Rights of Persons with Disability, Declaration on the Elimination of Violence against Women et cetera et cetera. I need to stop here so as not to digress from the theme of the seminar and my topic for discussion. However, there is need to mention that there are also regional instruments touching on Human Rights.

We have the African Charter on Human and Peoples Rights and the African Charter on the Rights and Welfare of the Child. It cannot be lost on all of us, distinguished guests in this hall, that given the importance of human rights all over the world, a day is set aside to mark these inalienable rights of men, women, and children. The theme of this summit “Respect for Human Rights a Panacea for Peaceful Coexistence and Generational Equity”, is therefore apt as the World celebrates the Human Rights Day. The whole world on this day is unwittingly promoting and acknowledging the importance of the Rule of Law, observance of fundamental human rights, the development and reform of the Law.

I have ruminated over the topic of my paper. I am comfortable with the word “Reflections” as it pertains to my thoughts and consideration of makes a sound human rights judgement. However, what a sound human rights oriented judgement is, is dependent on not only the judges thoughts and perception, but also an objective rather than subjective approach or consideration of the verifiable facts as presented before the court. The judgement of a court may be sound in the view of the judge, but it may not meet the aspiration of the person who lost in the suit or the appellate courts that may not see the judgement as sound for various reasons. The bottom line in any judgement, is the attainment of justice for the aggrieved. Permit me ladies and gentlemen, to quote from the book of Oputa JSC (of blessed and fond memories as an intellectual and as a Jurist), “OUR TEMPLE OF JUSTICE” wherein the respected jurist stated thus: “This court in which we sit is a Temple of Justice, and the Advocate at the Bar as well as the Judge on the Bench are equally Ministers in that Temple. The objects of all, equally, should be the attainment of Justice. Now justice is only reached through the ascertainment of the truth, and the instrument which our law presents to us for the ascertainment of the truth and falsehood of any criminous is the trial by jury. The trial is the process by which we endeavour to find the truth………………………………………………The infirmity of human passion may lead us to take false views, and sometimes to embarrass and retard rather than assist in attaining the great objective, the temperament, the imagination and the feelings may lead all mislead us in the chase…………….”.

I have been on the bench and I have delivered judgements on human rights actions. There is no doubt that the judge must be abreast of the law and the decisions of the superior courts. The advocates appearing before the court as ministers in the temple of justice also play a vital roll. I remember in one of the fundamental rights cases that I dealt with when I sat at the Ado Ekiti Division, It was on the day of the adoption of written addresses that the defence counsel cited a Court of Appeal decision which decided that only one applicant can file a suit and not more that one applicant in an action, even if they have similar claims in circumstances that are similar against the same defendant. I had to strike out and not dismiss the suit for this reason especially being a fundamental rights action. However, when I got to Abuja, I had to decide a fundamental rights matter which was filed by many applicants jointly. The learned counsel for the applicants also filed an application for interim injunctions, which I was reluctant to grant in view of the number of the applicants on the court process. Therefore, with the Judgement of the Court of Appeal, Benin Division at the back of my mind, I asked the learned counsel to address me whether more than one applicant can file a joint action. That learned counsel, was prepared like the motto of the Boys Scout which says “BE PREPARED” for the issue I raised suo muto. He immediately cited a resent case decided by the Court of Appeal, Kano Division on that issue which answered the question in the affirmative thus making untenable the previous decision of the Benin Division, which I applied in Ado Ekiti. I granted the interim orders pronto. I came across in the preparation of this paper, another decision of the Calabar Division of the Court of Appeal which followed the previous decision of the Benin Division. However, there is a recent decision of the Court of Appeal Ibadan Division, the case of INCORPORATED TRUSTEES OF DIGITAL RIGHTS LAWYERS INITIATIVE & ORS V NIMC(2021) LPELR-55623(CA), which held inter alia that joint applications is allowed in fundamental rights cases. The Court of Appeal, relied on the Supreme Court decisions in DIAMOND BANK PLC V OPARA & 2 ORS(2018) LPELR-43907(SC) and FBN PLC & ORS V AG FEDERATION(2018) 7 NWLR (Pt.1617) 12. By the doctrine of stare decisis all courts must not only follow the decisions of the Appellate Courts, the most recent rather than the later must be followed no matter the view of the Judge to the contrary.

NBA CO-OPTS 150 MEMBERS INTO THE NATIONAL EXECUTIVE, AS 38 SENIOR ADVOCATES MAKE THE LIST