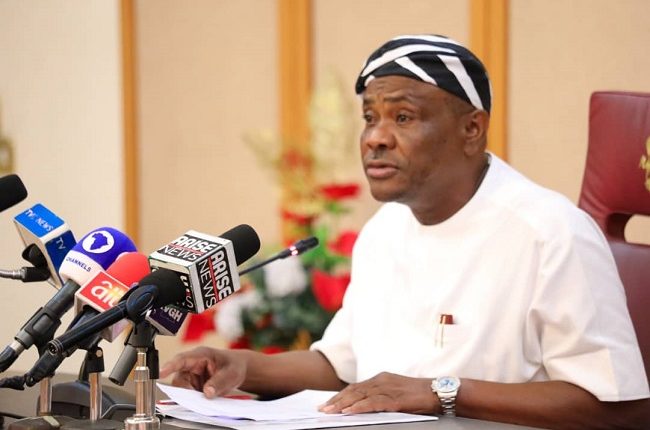 The governor of Rivers State, Nyesom Wike, has said he has the capacity to take power from the All Progressives Congress come 2023 and that if the Peoples Democratic Party must win, he should be given the ticket to contest.

Wike made the statement while speaking on Tuesday in Gombe where visited stakeholders of the PDP as part of ongoing consultations ahead of the party’s presidential primary election.

He asked the stakeholders, that, as delegates at the party’s convention, they should not waste their votes on candidates who could not win the 2023 general election.

Wike said, “If you want PDP to win election in 2023, I have made myself available. Give me the ticket, let me go and take the power for you. We are talking about who can take this power from APC. That person is me.”

“So, it is not for sentiment. It is not for people to come and tell you, look, it must come from here, no, no. It is for those who have the capacity. If given the opportunity, I will replicate what I’ve done in Rivers State as President of Nigeria.”

The governor also questioned the APC-led administration its claim of disbursing over N300 billion into agriculture, asking where the food produced was.

“They said they have given over N300 billion for agriculture. I have no problem with that. Even if they have spent N1 trillion, where is the food?” Wike asked.

“I don’t want people going to buy rice and doing pyramid. I want to see to it that agriculture is working,” he said.

Akume: I’ve Donated My N20m For Nomination Form To APC