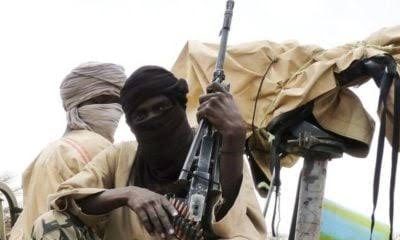 The bandits, who abducted passengers on a Kaduna-bound train last month, have threatened to kill them if the federal government fails to meet their demands.

In a video released on Wednesday, the armed men said they were not interested in money, adding that the Federal Government knows what they were asking for.

The video, which was less than two minutes, had four of the bandits with one of the abducted passengers – Mr Alwan Hassan, Managing Director of Bank of Agriculture.

One of them, who spoke in Hausa, said the MD was released due to his age and in the spirit of Ramadan.

The terrorists, clad in military uniforms, made the video at the Forward Operational Base in Polwire, Birnin Gwari, Kaduna State, which was attacked on Monday.

One of the Armoured Personnel Carriers (APCs) that was burnt during the attack was used as a background in the video.

“We are the group that kidnapped passengers on the train few days ago. Among them is this man that was pleading with us due to his old age and we felt pity on him due to the month of Ramadan, so, we want to give him back to his family.”

“But the government should not misunderstand this, as it is a gesture we made because of the pity we had on him.”

The bandits then asked the MD to make some remarks. Speaking briefly, Hassan said he was released out of pity.

“[I want to witness to everyone that they took pity on me due to my old age. I was told to go out but I want to assure everyone that I left huge number of people behind and they are in situation that requires help for them to be released fast. I hope that government will meet the head of this group to release as them as soon as possible[/b],” he said

One of the bandits added, “I want to reiterate that what he said is true. Don’t try to try to investigate us immediately or to rescue them because killing them is not an issue for us. We don’t want your money, if we want money, we wouldn’t have carried out the attack. You know what we want,” he said