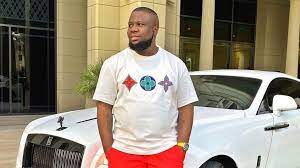 The court’s Director of Media Relations, Thom Mrozek, said Hushpuppi has been scheduled for sentencing on Valentine’s Day, according to BBC Pidgin.

The document was signed by Hushpuppi; his lawyer, Loius Shapiro; Acting United States Attorney, Tracy Wilkison, amongst others.

It stated that Hushpuppi risks “20 years’ imprisonment; a 3-year period of supervised release; a fine of $500,000 or twice the gross gain or gross loss resulting from the offence”.

Also, the court had ordered the Federal Bureau of Investigation to arrest the suspended Head of the Intelligence Response Team, DCP Abba Kyari, for his alleged role in a $1m scam allegedly perpetrated by Hushpuppi and five others.

However, in December 2021, Mrozek declined comments on the warrant of arrest the court issued months earlier that the FBI should apprehend Kyari and other defendants in the case.

Mrozek, in an earlier email interview with our correspondent on December 13, 2021, had said the sentencing of Hushpuppi was still pending.

The Dubai Police in the United Arab Emirates had in June 2020 arrested Hushpuppi and his gang. They were later extradited to the US for prosecution by the FBI.

The FBI Special Agent, Andrew Innocenti, had alleged that Hushpuppi contracted the services of Kyari after a “co-conspirator,” Chibuzo Vincent, allegedly threatened to expose the alleged $1.1m fraud committed against a Qatari businessman.

Innocenti, who said he obtained voice calls and WhatsApp conversations between Kyari and Hushpuppi, had also alleged that the latter paid the police officer N8m or $20,600 for the arrest and detention of Vincent.Kyari had taken to Facebook on July 29, 2021 to deny the allegations, but he later deleted the post after editing it about 12 times.

Garba Shehu: Buhari Will Hand Over To APC In 2023