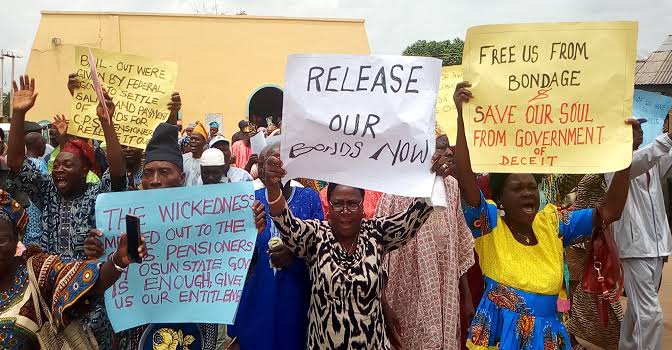 The Nigeria Union of Pensioner (NUP) in Ekiti State has organized a prayer session for all members in the state seeking the intervention of God over the unpaid gratuity amounting to N1.8 billion being owed by the state government.

The chairman of group in the state, Mr Joel Akinola, lamented that the state government has abandoned pensioners in its failure to pay the outstanding entitlements which he said member had worked for which had made them organise the prayer session on Tuesday.

He said, “there is nothing like God cannot do, hence the decision for us to organize this prayer session for Him to intervene in the affairs of pensioners. Gratuity and pension is a right and statutory not bonus. We have laboured and served our nation and state meritoriously for 35 years, we deserve better than what we have been getting.

“Currently, the state government is owing us gratuities of N1.8 billion while local government is owing our members N9 million. It is highly embarrassing and it appears government don’t have time for us. We should be seen as a project as well like the way they do roads, hospitals and schools.

“Each time there is a transition of power, it’s often difficult to agitate or confront the new governor because they will be quick to tell you that they are not the one owing us, you can see the situation.”

Earlier, an Islamic cleric, Abdullahi Abdulmutalab, urged the pensioners to build more faith in God, expressing optimism that government would soon attend to their needs.