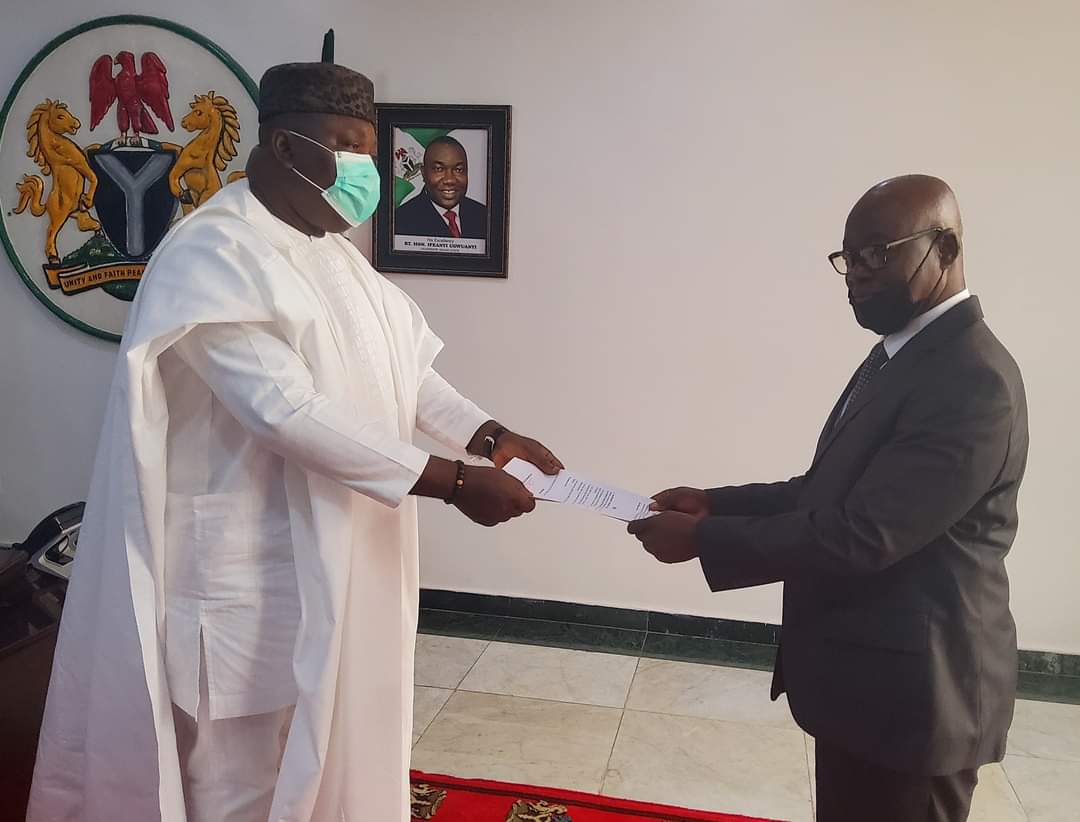 Governor Ifeanyi Ugwuanyi of Enugu State, on Tuesday, swore in Hon. Justice Afojulu Raymond Ozoemena as the substantive Chief Judge of the State after he served as Acting Chief Judge for three months on two consecutive occasions.

Hon. Justice Ozoemena’s appointments on acting capacity by Gov. Ugwuanyi was sequel to the retirement of the former Chief Judge, Hon. Justice Priscilla Ngozi Emehelu, who attained the constitutionally prescribed retirement age of 65 years on September 7, 2021.

The governor explained that the decision to swear in Hon. Justice Ozoemena as Acting Chief Judge of Enugu State on September 7, 2021 and the renewal of the appointment on December 8, 2021 upon the expiration of the first three months, was based on the order of seniority of the Judges of Enugu High Court as confirmed by the National Judicial Council (NJC).

Swearing in Hon. Justice Ozoemena as the Chief Judge of Enugu State, at the EXCO Chamber of the Government House, Enugu, on Tuesday, Gov. Ugwuanyi disclosed that the function was sequel to the recommendation by the National Judicial Council (NJC) and subsequent confirmation of his appointment by the Enugu State House of Assembly, in fulfillment of the provisions of Section 271 Sub-section 1 of the 1999 Constitution of the Federal Republic of Nigeria (as amended).

Stating that he swore in Hon. Justice Ozoemena as the Chief Judge of Enugu State after all the conditions precedent for the appointment was dutifully fulfilled, Gov. Ugwuanyi, who described the exercise as “God’s will, made manifest at God’s own time”, congratulated the newly sworn in Chief Judge.

The governor pointed out the Hon. Justice Ozoemena is eminently qualified for the job, expressing confidence that “you will bring your juristic erudition, diverse experience and integrity to bear on the administration of the Enugu State Judiciary”.

“I wish you well and pray God to grant you stellar career as the Chief Judge of Enugu State”, Gov. Ugwuanyi added.

Responding, the new Chief Judge of Enugu State, Hon. Justice Ozoemena, thanked Gov. Ugwuanyi for his endurance and consistency in ensuring that he was sworn in as Acting Chief Judge for two consecutive times and thereafter as the substantive Chief Judge of the State.

He therefore promised the governor of the cooperation and support of the State Judiciary under his watch, stressing that they will maintain the tempo of peace and harmonious relationship that exist between the Executive and the Judiciary in the state.

The event was witnessed by the President, Enugu State Customary Court of Appeal, Hon. Justice George Nnamani; former Minister of Information and immediate past President General of Ohaneze Ndigbo, Chief John Nnia Nwodo; Secretary to the State Government, Prof. Simon Uchenna Ortuanya; the Chief of Staff to the Governor, Rt. Hon. Dr. Festus Uzor; the Deputy Chief of Staff to the Governor, Prof. Malachy Okwueze; the State Attorney-General, Chief Miletus Eze; other members of the State Executive Council (EXCO); Special Advisers to the Governor; Judges of the State Judiciary and members of the State Judicial Service Commission, among others.