Northern Governors To Collaborate With ALGON To Tackle Insecurity, Poverty In Northern Nigeria 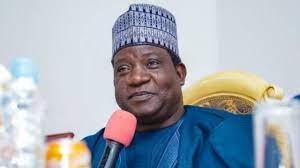 Lalong disclosed this when he received the newly inaugurated leadership of ALGON at the Government House Rayfield, Jos, Plateau State a courtesy visit.

The Chairman, Hon. Bala Usman Chamo, who is the ALGON Chairman in Jigawa State, said they were at the Government House Jos to pay respects to Governor Lalong who is the Chairman of the Northern Governors Forum and a leader who has demonstrated passion and support for the development of the Local Government system.

He recalled that Governor Lalong was among the first Governors to grant financial autonomy to Local Governments in the country as well as to the legislature and Judiciary.

Hon. Chamo described Governor Lalong as a man of peace and a committed leader who has done so much to restore peace to Plateau State by adopting an all inclusive governance system that gives voice to all shades of opinions.

He appreciated the leadership of Governor Lalong as Chairman of the Northern Governors Forum which he said has inspired other Governors in the region to join hands in tackling the challenges of the region.

Lalong congratulated them for their inauguration and said the body will be very useful in working with the Governors towards addressing key challenges of the Northern Region and Nigeria at large.

He said so far, there is a cordial working relationship between the Governors and traditional rulers, the youths, captains of industries among others in addressing the challenges of poverty, illiteracy, insecurity, diseases among others.

Lalong said as leaders at the grassroots level, the Northern ALGON Forum stands in a good position to contribute to finding lasting solutions to the region’s economic and security problems by working with all stakeholders especially the Governors.

The delegation also had the ALGON Chairman of Plateau State and Chairman Shendam Local Government, Miskoom Alex Naantuam and other BOT members.