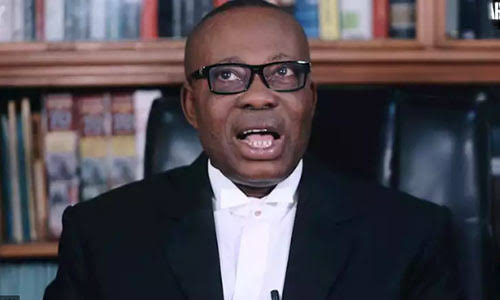 I have been careful not to jump into this matter of imprisonment of Mr Inibehe to avoid being accused of hasty intervention. Effiong is my friend and sort of a “brother”. He is known for his courage, straightforwardness and perhaps bluntness.

His defence of one Leo Ekpeyong for defamation case brought by His Excellency, Mr Udom Emmanuel, the governor of Akwa Ibom has been turbulent.

The chief judge has threatened to jail him even before now. The threats for the jail was because Mr Effiong has sought to defend the cause of his client in a way that the Chief Judge considers an affront to her authority as a judge.

An application for the Chief Judge to recuse herself from handling the case is still pending and has not been heard before the commencement of trial today. For a litigation lawyer, such a procedure is erroneous and a presumption that the judge is indeed biased going by the allegation of Mr Effiong.

Back to today when the incident of imprisonment took place. At the commencement of proceedings, it was reported that Mr Effiong politely reminded Her Lordship of the pending application for recusal. Her lordship ignored the counsel and ordered commencement of trial.

In the middle of the trial, a journalist of Premium Times covering the proceedings was ordered to leave the courtroom. Mr Effiong politely reminded Her Lordship that the court room is a public place, and besides the trial is not a secret trial. Again her Lordship ignored him.

It was at this juncture that Mr Effiong raised the issue of the two policemen who allegedly were armed with AK 47 who were seated in the courtroom at the instance of the Chief Judge.

Are those armed police providing security to the judge, court, or to the litigants? Was Mr Effiong rightly or wrongly alarmed by their presence? Does he not have a right to express his fears especially in the light of the order asking a journalist covering the trial to go out?
What is the contempt here? Is it his expression of fears of the presence of the armed policemen in the court? Now what is the procedure to try contempt whether in the face or ex-facie curiae?

Is raising fears about the presence of armed policemen evidence of contempt in the face of the court? What is the content of the contempt here please? Somebody should help me out. Did he abuse the judge or interfere in the administration of justice in the way he responded to the court during the trial? What could be the situation that warranted the contempt trial?

Is Her Lordship angry because of the application for her to recuse herself? Is that contemptuous? Assuming but not conceding that it is, what is the right procedure to try a Defendant for contempt ex-facie curiae? Was that procedure complied with in the present circumstance?

One month jail term for an offence which trial process is in clear doubt is something that bothers me.

I must tell you that I am eager to hear the side of the Court on this matter. Everyone is entitled to a fair hearing including the Chief Judge.
If the judge was over hyper-active in handling this Effiong’s matter, be rest assured that this conviction will be set aside by the appellate court for being erroneous.

Spidel in which I am the chairman will take a position in the interest of the Public when the full facts of what transpired in the court today are fairly disclosed or revealed. We await the reaction of the court or any lawyer who was present during the proceedings. God forbid the day a lawyer becomes a “Criminal” for defending a client. May it never come!