Gender Bills: Male Lawmakers Against It Have No Respect For Women – Minister 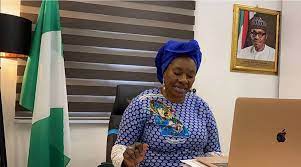 Pauline Tallen, Minister of Women Affairs, has said that male lawmakers who voted against gender bills seeking to amend the constitution have no regard for women.

She said this on Wednesday after the Federal Executive Council (FEC) meeting in Abuja.

“It clearly shows that the men that were against the bill don’t have any respect for women; it’s clear. But I am not generalising; not all the men in the national assembly. We have the figures — 72 men in the House of Representatives voted in support of the bill,” Tallen said.

According to her, Nigerian women are already strategising on the next line of action.

Tallen who was present at the plenary session on Tuesday, had described the development as a show of shame.

Wife of the Vice President, Dolapo Osinbajo, who was also in attendance, said she remains hopeful that it is not the end of the agitation for women inclusion.

By Wednesday morning, more women joined their voices to express their displeasure with the development.

Various women groups occupied the gate of the National Assembly in protest against the rejection of the bills.

The groups demanded that the Federal lawmakers take another look at the requests for 111 seats for women, citizenship, 35% representation in party leadership, more appointive positions in government, and vote in favour of these amendments.

On Tuesday, the lawmakers had voted against bills seeking to promote more opportunities for women in political parties and governance.

One of the bills titled ‘Act to Alter the Provisions of the Constitution of the Federal Republic of Nigeria, 1999 to Provide for Special Seat for Women in the National and State Houses of Assembly; and for Related Matters,’ failed after 208 members out of 290 present, voted against it.

Buhari Approves $8.5m For Evacuation Of Nigerians In Ukraine