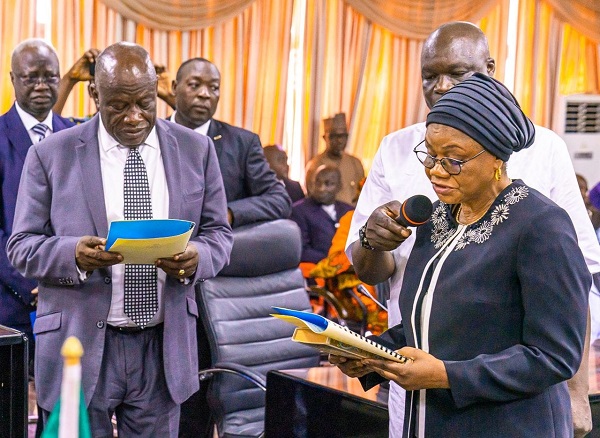 Justice Hapsat Abdurrahman has been sworn in as the Acting Chief Judge of the state by the Adamawa State Governor, Ahmadu Umaru Fintiri.

Justice Hapast is the first female to be sworn in as the Chief Justice of the State.

Hapsat being the most senior judge in the state succeeded Justice Nathan Musa who retired last week.

Speaking at the occasion, Fintiri expressed delight in the fact that he is the first governor to have nominated a woman as the state’s acting chief judge, describing the development as a triumph for the womenfolk.

“This historic event represents a profound step forward for our State and womenfolk who now see themselves reflected on our highest court”, he said.

He charged the appointee to continue to exemplify the virtues of hard work, perseverance and grace for which she is known, adding that as the election approaches, the judiciary must give confidence to the electorate and ensure effective resolution of election-related conflicts.

In her acceptance speech, Justice Hapsat said she would not take the position for granted because she saw it as a trust and opportunity to contribute to the state and the country, pledging to discharge her responsibilities with honesty and in accordance with the law.