WOMAN LAWYER MALTREATS DOMESTIC STAFF, FORCES HER TO STAY AGAINST HER WILL (VIDEO) 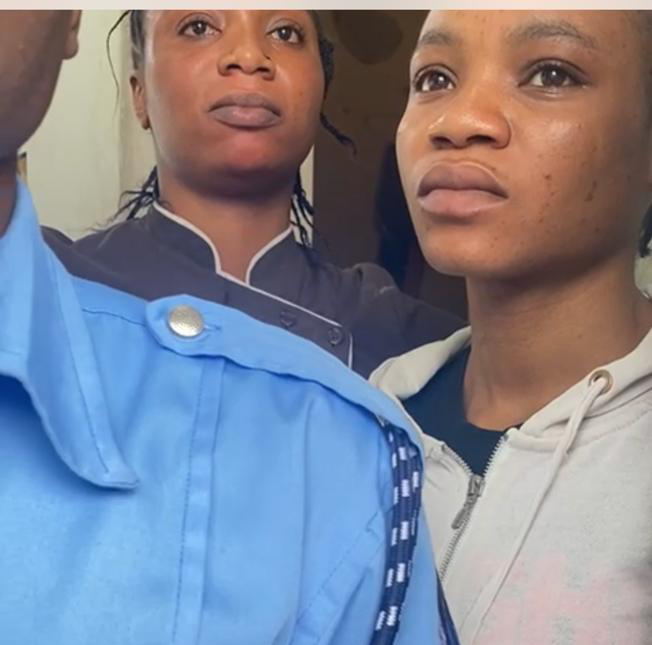 A domestic staff in Ikoyi, Lagos, Theresa Olong, has alleged that her boss has been maltreating her, beating her and sometimes denying her food and has refused to allow her go even after refusing to pay her salary for three months. She said that her boss seized her phones immediately she resumed work in the house which makes it difficult to reach out to her family members and complain that she was being maltreated.

A good hearted individual who heard about these issues alerted Justice Vault Foundation to wade in and help the victim.

A representative of Justice Vault Foundation, Ifeoma Ben, called the contact of the woman which Truecaller identified as *Olalonpe Oyebode* and inquired to hear the woman’s side of the story but the woman did not take the call. The organization also sent a message to the woman who said that she was busy and would respond when she is free. The organization later visited the premises at 8A Mobolaji Johnson Avenue Ikoyi and met the Security Guard who said that his “madam” has instructed that he should not allow anyone see Theresa.

According to Ifeoma Ben:
“When I got the report, I asked for the contact of the woman and that of the family members of the girl. I called Theresa’s brother who said that he was on his way from Ajah to Ikoyi and that his sister called him with someone’s phone and complained that she does not want to work for the woman again and that the woman had earlier agreed to let her go by the end of August but eventually refused to let her go.

I was curious when I heard that the woman is a lawyer and a retired banker. I called the woman to hear her story but she did not take the call and did not respond to my queries via SMS and WhatsApp.

Theresa’s brother called me and said that the woman had instructed the security guard not to allow him access to the house but to tell him that there’s no one bearing Theresa in the house. I immediately drove down to Ikoyi but before I got there, the woman had left the house.

I met the security guard, introduced myself and requested to speak to Theresa but he initially refused because of his Madam’s instructions. I asked him to allow Theresa to come and speak to me at the gate, and that I won’t take her away but that I just wanted to hear her story. Theresa narrated her story and I did a video recording of her story. I also did a video recording of her brother’s story.

I attempted calling the woman several times but when she did not take my calls, I took the girl’s brother to Ikoyi Police Station where we lodged a complaint”

Justice Vault Foundation also gathered that the woman usually maltreats her domestic staff who always seek to go one after the other.

The Police is currently investigating the matter and has promised to see that justice is done.

Justice Vault Foundation is also following up on the matter.