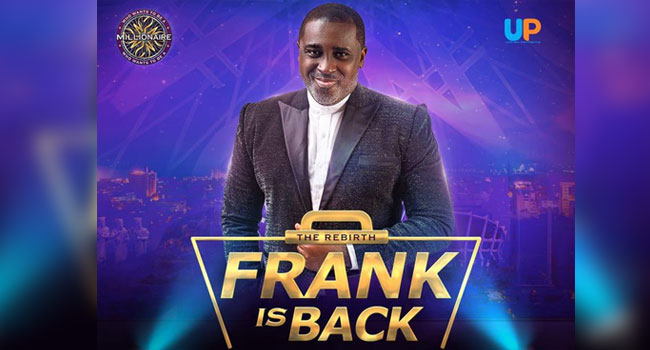 Popular Television game show ‘Who Wants To Be A Millionaire (WWTBAM) has made a comeback with its host, Frank Edoho.

Organisers of the game show unveiled Frank Edoho on Sunday night at an event held in Lagos.

The new season will commence in March 2022 and will run for 52 weeks.

According to the sponsors, a whooping sum of N20 million will be won.

Themed “The Rebirth”, the new edition of the show has a new lifeline called “asking the host” to aid contestants when they are stuck on questions.

The Managing Director of UP, Agada Apochi, speaking at the event in Lagos said the show is rebranded to thrill the audience.

“We are sponsoring Who Wants to Be a Millionaire to entertain, educate and excite Nigerians. The return of WWTBAM is coming with a bang that would create lasting memories in the audience’s minds. It is going to keep them on the edge of their seats as new millionaires emerge from the show,” he said.

Frank Edoho had hosted the show from its inception on October 8, 2004 debut until September 2, 2017.

He had exited by announcing on Twitter that he would no longer host the show because he did not reach an agreement with the organisers of the show on certain conditions.

Frank on Monday morning announced his return to the show in a post on his official Twitter handle and appreciated fans and well-wishers.

Hey everyone. I assume you know by now that I have been offered the role of Host of WWTBAM Series 2. My immense gratitude goes to all of you for hoping that I get the job. Thank you for your kind wishes and felicitations
God bless you all. 💙#FrankIsBack #WWTBAMTheReturn pic.twitter.com/DSBkQckvnd