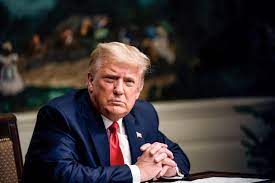 A judge ruled Thursday that former US President Donald Trump must testify under oath in New York’s civil probe into alleged fraudulent practices at his family business.

The ruling is the latest legal blow to Trump as he fights numerous cases that threaten to complicate any bid for another run at the White House in 2024.

He said the three must sit for depositions within 21 days. The Trumps are expected to appeal.

Earlier during oral arguments, the Trumps’ lawyers said that the subpoenas should be quashed because having them give evidence in the civil case would prejudice their rights in a parallel criminal investigation.

Engoron said their argument “completely misses the mark,” noting that neither the Manhattan District Attorney, which is running the criminal investigation, nor James’s office have ordered the Trumps to appear before a grand jury.

In his ruling, Engoron added that the Trumps could invoke their Fifth Amendment right not to incriminate themselves during questioning in the civil case.

He noted that Trump’s other son, Eric, had pleaded the fifth “more than 500 times” during a deposition for James’s investigation in October 2020.

James, a Democrat, announced in January that her investigation into the Trump Organization had uncovered “significant evidence” of fraudulent or misleading practices.

She said that the civil inquiry had found that the Trump Organization fraudulently overvalued multiple assets to secure loans and then undervalued them to minimize taxes.

The Trumps have claimed the investigation is politically motivated and has urged the court to quash subpoenas against the three.

If James finds evidence of financial misconduct she can sue the Trump Organization for damages but cannot file criminal charges.

The probe, however, is running alongside a very similar criminal investigation by the Manhattan District Attorney for possible financial crimes and insurance fraud.

In July last year, the Trump Organization and its long-serving finance chief, Allen Weisselberg, pleaded not guilty in a New York court to 15 felony fraud and tax evasion charges.

His trial is due to begin in the middle of this year.

Trump, 75, has so far kept the electorate and commentators guessing about whether he intends to seek the Republican nomination again.