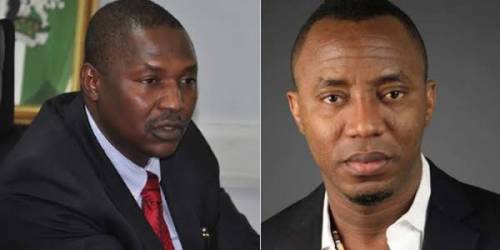 The Nigeria Police Force has again invited human rights activist, Omoyele Sowore over a frivolous petition by a former member of the House of Representatives, Ned Nwoko.

A team of armed policemen who laid siege to the entrance of the Court of Appeal had on Thursday arrested Sowore.

He was taken to the disbanded Special Anti-Robbery Squad (SARS) unit, otherwise known as Abattoir, located at Guzape where he was detained for hours.

A police source told reporters that Nigeria’s Attorney-General of the Federation (AGF) and Minister of Justice, Abubakar Malami and Nwoko were unhappy the activist was released.

The source added that the duo has secured a judge to remand Sowore in prison as soon as he honours today’s invitation.

“Ned and the AGF are unhappy that we released him last night. They have secured a judge to remand in prison custody today,” the source said.

Confirming his invitation on Twitter, Sowore said, “@mBuhari cabal members led by Malami are so scared now, they want to take me before a judge & send me to prison so that I won’t be able to declare for presidency early next week! We are more than ready! #RevolutionNow #WeCantContinueLikeThis.”

“Earlier yesterday morning a group of well-armed govt sponsored miscreants attacked our contingent, assaulted and stole their phones in the Gudu area of Abuja on our way to the Court of Appeal.

“The case was immediately reported to the police but they did nothing about it. It turns out it was part of a bigger plot as later in the afternoon a group of well-armed policemen accosted me outside the Court of Appeals gate in Abuja arrested me, accusing me of “defamation” over reports published by SaharaReporters, a standalone legal entity.

“After hours of detention, they let me leave. I have just been informed now that they’ve procured a judge to remand me in prison custody because they heard I am planning to declare my Presidential ambition early next week. I will be bearding out shortly to meet them, I am fully prepared and very convinced that they are irreversibly heading towards self-destruction. #RevolutionNow #WeCantContinueLikeThis,” he also said.