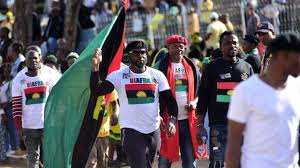 Assistant Inspector General of Police in charge of Zone 13 Ukpo, Umar Muri, has said that the police commands in Anambra and Enugu states together with the Nigerian Army are working together to end the observation of sit-at-home orders in the states.

Although the police boss spoke about the two states under his control, sources said that similar efforts were being made by other commands to ensure that an end is put to the observation of sit-at-home in the South East.

Muri disclosed this at the Zone 13 headquarters shortly after decorating officers attached to the two commands who were recently promoted. He was assisted by the Commissioners of Police of the two states.

“The two commands and the army are worried about this sit-at-home. First, sit-at-home is illegal. And we are doing our best to ensure that this illegal sit-at-home is no longer in existence in the two states I am commanding.”