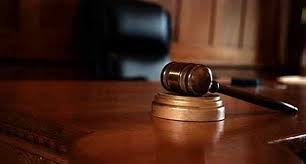 A Police officer, Mr. Wasiu Abogunloko, attached to Ayobo Division of the Lagos State Command, was reportedly stabbed to death with a scissors by an angry motorcycle operator a.k.a Okada rider over the seizure of his bike at night.

The suspect, Aliu, also stabbed a teenager, who is currently receiving treatment with a scissors after he had stabbed the late Abogunloko mercilessly and he slumped and died on the spot due to too much bleeding.

When he was taken to an undisclosed hospital, the doctors merely certified him dead and the corpse was deposited at the mortuary for autopsy report.

Following the ugly incident, the people around mobilized and apprehended the suspect, Aliu Sanusi, and then handed him over to the Police in the area. From there, he was transferred to the SCID, Yaba, Lagos, for murder.

Having been found culpable, he was charged subsequently before the Ebute Metta Magistrates Court for murder, which attracts life imprisonment if he is tried and found guilty before the Court.

The Prosecutor, Insp. Oladele Adebayo, had told the Court that the defendant had committed the offences on 3rd January, 2022, at about 11.30p.m. at Megida Bus stop, Ayobo.

He told the Court that the defendant had stabbed a Police officer, Mr. Wasiu Abogunloko, with a scissors, which led to his death and had also stabbed a teenager, who is receiving treatment.

“The defendant’s bike was seized by the deceased officer and in anger Aliu brought out a scissors, which he used to stab him to death.”

“While escaping, some people, who witnessed the scene, tried to grab him amongst who was the teenage, who also got stabbed by Aliu in his bid to escape,” he said.

The offences according to Adebayo contravened Sections 173 and 223 of the Criminal Law of Lagos State, 2015.

The case was adjourned until 15th March 2022, for legal advice.

The defendant was arraigned on two-count charge of murder and bodily assault and his plea was not taken before the Court.

The Chief Magistrate, Mrs. F.M. Kayode, ordered the remand of the defendant at the Ikoyi Correctional Centre pending receipt of legal advice from the office of the State Director of Public Prosecutions (DPP).