No Justification For Coup – Osinbajo 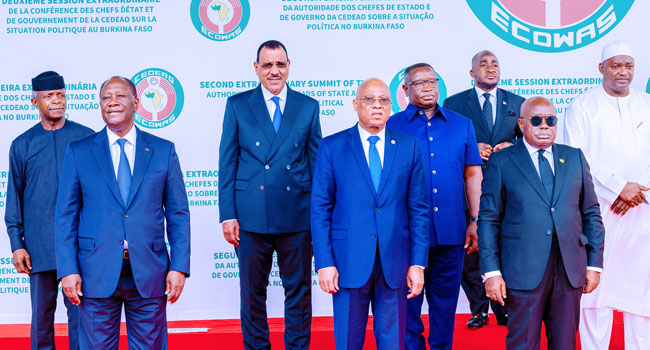 Vice President Yemi Osinbajo has faulted recent coups in West Africa, insisting that democracy is the only acceptable way to change governments.

Osinbajo made the comment after the Economic Community of West African States (ECOWAS) emergency meeting held in Accra on Thursday.

“I think it has been fruitful,” he said about the meeting at the Ghanaian capital. “The Heads of State again reiterated the firm position that had been taken earlier that there is absolutely no excuse for a change of government by coup d’etat.

“So, what happened in Burkina Faso was considered and has been condemned by all of the heads of state and we do not think there is any excuse for it whatsoever. But at the moment, of course, engagement is going on with the military junta and also we condemned the attempted coup in Guinea-Bissau and congratulated President Embalo and the people of Guinea-Bissau for resisting that unconstitutional attempt to change the government.

“All in all it has been fruitful and we are very hopeful that lessons had been learnt and we will not see a repeat of this.”

Osinbajo maintains that there is no justification for coups. Photo: Twitter@akandeoj

The Vice President, who represented President Muhammadu Buhari at the event, condemned the coup in Burkina Faso and the attempt to do the same in Guinea-Bissau.

On the situation in Mali, he said he expects the country’s authorities to respond to the sanctions imposed on them by ECOWAS. Osinbajo said, “We expect that at some point, the Malian authorities themselves would begin to speed up the process of transition. We expect that they would do so. We are looking forward to that engagement”.

The vice president has since returned to the country following the meeting.