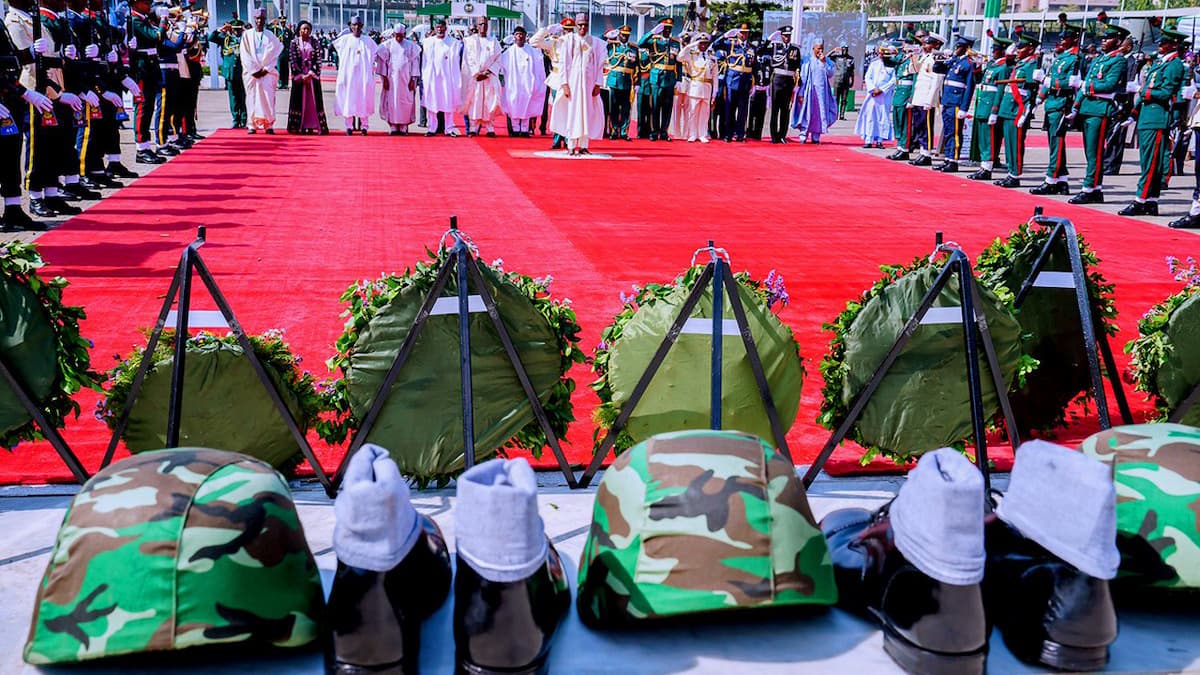 Many Nigerians are paying tribute as the country marks the Armed Forces Remembrance Day for the country’s fallen heroes.

This event has been set aside to commemorate the end of the Nigerian civil war since January 1970.

It is also used to remember those who laid down their lives during the two world wars, the various peace-keeping operations around the world, various internal security operations, including the ongoing fight against insurgency, terrorism, banditry and secessionism, amongst other threats to national security.

The occasion is also used to draw attention to the welfare of veterans, surviving but retired members of the armed forces, especially, the disabled, the sick and the aged.

The ceremony, organised by the federal government, also involves parades, laying of wreaths and gun salutes.

Speaking on the event, the Chief of Defence Staff, Lucky Irabor, said the military would not relent in discharging its constitutional duties towards safeguarding national security and democracy.

“Today, I believe that Nigerians are no longer in doubt as to the subordination of the military to civil rule. I believe that no one is in doubt that democracy has come to stay,” he said.

In his goodwill message on Friday, the Chief of Army Staff, Lieutenant General Farouk Yahaya, commended the efforts of members of the armed forces in the various operations against national security, adding that the sacrifices of the fallen heroes will never be forgotten.

He charged members of the armed forces not to relent, but to sustain and consolidate on the successes recorded so far.

Also, in his message, the former spokesman of the Nigerian Army Brigadier-General Sani Usman Kukasheka, said the Nigerian Army had not fared badly over the years in their various operations in the fight against terrorism, kidnapping, banditry and other security challenges.

He said despite their sacrifices, the level of understanding and appreciation is not commensurate as many gallant officers, soldiers, ratings, airmen and women, as well as many types of equipment, had been lost in the course of national duty.

Speaking on the event, an elder statesman, Tanko Yakassai, described the first military coup on January 15, 1966, as a national tragedy.

Yakassai said that before the coup, the military was not interested in politics, but subsequently, in attempts to correct the mistakes of the past, the military took over the government.

“The military should stay away from politics. Nobody asked anybody in the military to go there,” he said.

He said Nigeria was blessed despite its challenges, being the largest concentration of black people worldwide.