Nigerians From Ukraine To Arrive In Abuja Today 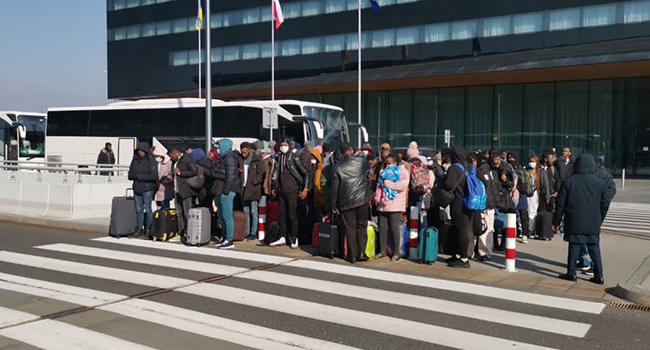 Some Nigerians are expected to arrive the country on Friday because of the Russian invasion in Ukraine.

Jets from Nigerian airlines, Max Air and Air Peace, had arrived in Poland and Romania as of Thursday for the evacuation.

Air Peace deployed its aircraft to Warsaw, the Polish capital while Max Air is in Romania.

About 5,000 Nigerians are said to be eligible for evacuation.

The flight from Poland was delayed on Thursday due to a delay in preparing passengers for the check-in process, a foreign affairs ministry official, Bolaji Akinremi, said.

The Polish flight was rescheduled for Friday morning.

Meanwhile, the flight from Romania is expected to touch down at the Nnamdi Azikiwe International Airport in Abuja between 3am to 4am on Friday morning.

The Federal Government on Wednesday said it has approved $8.5m for the evacuation of citizens.

According to the Minister of State for Foreign Affairs, Zubairu Dada, the countries where the pickup flights would be headed include – Poland, Hungary, Slovakia, and Romania.