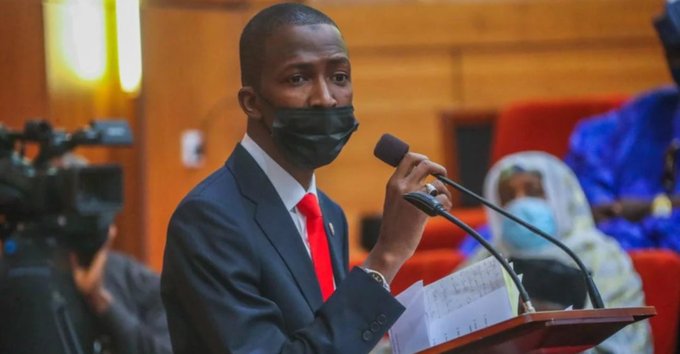 The Chairman of the Economic and Financial Crimes Commission, EFCC, Abdulrasheed Bawa, has called on the media to be familiar with the new Money Laundering (Prevention and Prohibition) Act 2022 so as not to run foul of its provisions.

He also emphasized the need for the media to continuously educate the citizenry on the new Money Laundering Act.

Bawa gave the charge on Tuesday, October 25, 2022 in Lagos while declaring open a one-day workshop on Financial Crimes Reporting organised by the EFCC for financial journalists.

Speaking through the Lagos Zonal Commander of EFCC, Ahmed Ghali, he said: “There are certain provisions of this new law that I believe will affect you directly or indirectly. One is secrecy of financial transactions.

“The new law criminalizes the operation of numbered accounts and also mandates financial institutions to ascertain the beneficial owners of accounts before opening such accounts. There is a more robust requirement for due diligence and reporting obligation by financial institutions and non-financial business and professions to the Special Control Unit Against Money Laundering, SCUML.”

The EFCC Chairman, who described as remarkable the roles of the media in projecting the work of the EFCC in the past 19 years, also sought greater collaboration and better information sharing between the media and the Commission.

According to him, “You are able to mine rich veins of information from a range of sources and this is an invaluable resource that will help us to do our job better where it is shared.

“Many of you have played commendable roles in bringing the efforts of the Commission at combating corruption and economic and financial crimes to the front burner and improving public consciousness about the ills of financial crimes. We can only ask for more support, while also urging you to do your work with utmost sense of responsibility.”

Bawa used the opportunity to express the progress being recorded by the Commission in the area of conviction, saying, “ The Commission secured 2,701 convictions as at October 7, 2022, in addition to recovering assets running into billions of Naira.”

He, however, said the Commission was not resting on its oars in spite of the conviction record secured so far within the year.

According to him, “We believe that more needs to be done to deter citizens from getting involved in financial crimes and discouraging the theft of public resources. We believe that some of these crimes could be prevented if the members of the public have the right information. It is for this reason we are intensifying our public enlightenment engagements which, in a few weeks’ time, will witness the formal launch of the EFCC Radio.”

The EFCC Chair, who also joined the programme virtually, restated the determination of the Commission to tackle financial crimes in the nation’s electoral process. He said the recent arraignment of persons arrested for inducing voters during the Osun governorship election should send a message to those bent on corrupting the electoral process that the consequences would be dire.

“Speaking on “Peculiarities, Trends, Typologies and Challenges of Cybercrimes Enforcement in Nigeria”, Mustapha Afeez, Head, Counter-Terrorism, General Investigation Section, CTGI, EFCC Headquarters, Abuja, advised individuals and organizations to be more cautious , particularly in the face of the increasing sophistication of cybercriminals across the world.

In his paper titled “Best Practices In Financial Crimes Reporting: A view From the Inside”, Dele Oyewale, Assistant Director, Media & Publicity Unit, EFCC, lamented what he described as “un-reporting, under-reporting of financial crimes and non-follow up of existing financial crime cases in court.”

Oyewale, who noted that economic and financial crimes across the world were evolving with worrying dynamics, called on the media to “attune itself to the rising strides and trends of criminality.”

Also, G.K. Latona, Deputy Director and Head, Legal and Prosecution, EFCC, Lagos Zonal Command, in his paper titled “ Challenges of Prosecuting Economic and Financial Crimes in Nigeria”, described corruption as a “species of the larger economic and financial crimes.”

He also decried the adverse impact of financial crimes in Nigeria, saying , “ it causes the plundering of public resources, under-development of the country, capital flight and illicit financial flow, international opprobrium, absence of foreign investors , unemployment and manipulation of the political process.”