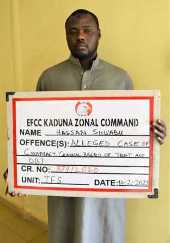 The Economic Financial Crimes Commission (EFCC) have secured the conviction of one Hassan Shuaibu Musa before Justice M.T.M. Aliyu of the Kaduna State High Court for alleged criminal misappropriation.

The charge reads: “that you, Hassan Shuaibu Musa on or about the 14th of January, 2019 in Kaduna within the jurisdiction of this Honourable Court, dishonestly misappropriated the sum of N 400,000.00 ( Four Hundred Thousand Naira) only paid to you by one Lawal Dahaltu for the sale of a plot of land situated at Gidan Daji, Danbushiya Kujama in Chikun Local Government Area, Kaduna and measuring 100ft by 100ft, purportedly owned by you, a claim you knew to be false and you thereby committed an offence contrary to Section 293 of the Penal Code Law of Kaduna State, 2017 and punishable under Section 294 of the same Law”.

He pleaded guilty to the charge and was convicted and sentenced to 10years imprisonment with the option of a fine of N100,000.00.(One Hundred Thousand Naira).

The convict has restituted the sum of N400,000.00 (Four Hundred Thousand Naira) to the complainant.