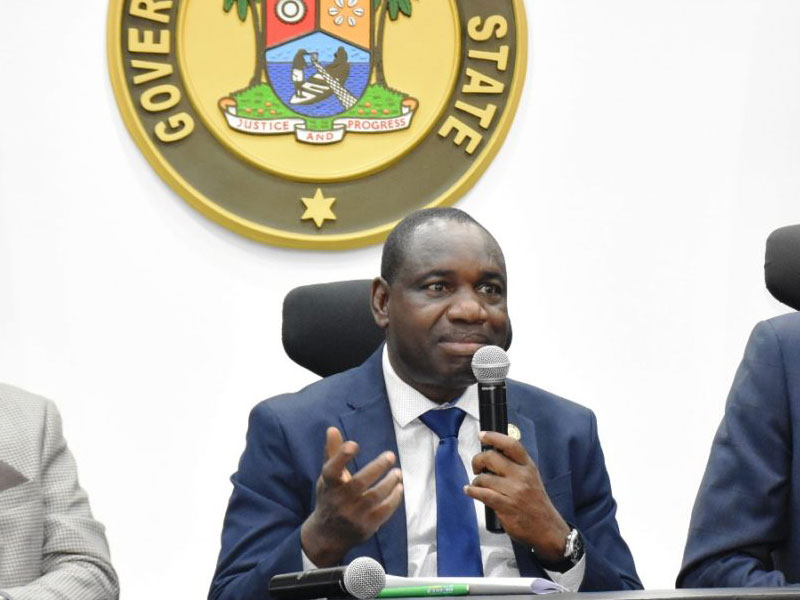 Lagos State Commissioner for Information and Strategy, Mr. Gbenga Omotoso, has pleaded with motorists to show some understanding over the planned re-opening of Lekki Ikoyi Toll Gate.

Omotoso spoke on Wednesday, about the plan by Lekki Concession Company(LCC), to open the tolling facility and run it free of charge for two weeks from 1st April, 2022. Collection of toll will begin two weeks after.

Expressing the need for Lagosians to be compassionate about the plight of the 500-strong LCC staff who have been out of work for 18 months, Omotoso said the Company had huge debts to pay. LCC is owing local lenders N61.1 million and foreign lenders $31.1 million.

His words: “The re-opening will go ahead as recently announced by the Lekki Concession Company and toll will not be collected for the first two weeks to test run the new technology being installed there. This is to ensure people have a better way of paying at the toll gate.

“It is also economically unrealistic and investment unfriendly for the Toll Plaza to remain shut forever as the Company has financial obligations to discharge to its creditors while its staff, about five hundred in number, also need to get back to work and earn their livelihood.

“The restoration of operations by LCCI follows extensive engagement with stakeholders, such as the residents association, traditional rulers, transport union and others, all of whom the State truly appreciates.”

Speaking further, the Commissioner said LCC is a major partner in the development of infrastructure on the Victoria Island-Lekki-Ikoyi-Ajah corridor and this has been variously expressed in the reconfiguration of the first, second and Ajah roundabouts to ease traffic as well as responding to security challenges to foster a safe and secure atmosphere for living and doing business.

To him, those criticising the planned return of tolling are right “because they are free to express their opinion. We always talk about our rights and privileges; we should also spare a thought for responsibility”, he said.

On the case of the slain 22 years old Bamishe, who disappeared after boarding a BRT bus and was eventually found dead, Omotoso said the State Government “is very sad” over the unfortunate development. He said Governor Babajide Sanwo-Olu personally commiserated with the family.

“Besides, a delegation of top government officials visited the family to console them”, Omotoso said.

“The development was heart-wrenching. The State Government mounted pressure on the security agencies and the principal suspect was fished out within 48 hours. Mr. Governor was in touch with the family and assured them of getting justice and every help whatsoever. The suspect is still in detention while others are still being tracked. Personally, Mr Governor’s action on the matter has remained low-key because he is not willing to make any political gain out of it by attracting undue publicity over the matter”, Omotoso said.

The Commissioner spoke also about the face-off between the National Secretariat and the Lagos State Chapter of the National Union of Road Transport Workers (NURTW), saying that the administration is on top of the situation and the suspension of the union’s activities remains in force.

His words: “The interest of the State is about peace, tranquillity and the ability of our people to go about their normal businesses without let or hindrance and I can confirm that the step taken by the administration is working.”

Omotoso said the Government’s ticket recently introduced as part of the transport regulation and reform is to consolidate all collections by the Local Governments and prevent harassment of transporters by every local authority in the course of doing their legitimate business.

On the Magodo Estate row, Omotoso reaffirmed that the State was transparent in its implementation of the Supreme Court judgement. He said that the resolution was delayed because of the discord among the Shangisha Landlords Association, the beneficiaries of the court decision. The State, said the Commissioner, has returned to the Supreme Court for clarity of the judgement.

Omotoso was asked why the State Government did not compensate the Cane Village residents for the demolition of their property. He said any demolition done for public infrastructure would always be paid for. He cited the Red Line rail project under which landlords and tenants were compensated, adding that this is the first time in Nigeria when tenants would get compensation. He enjoined those affected by the demolition at Cane Village to come forward with their title documents for processing of claims.