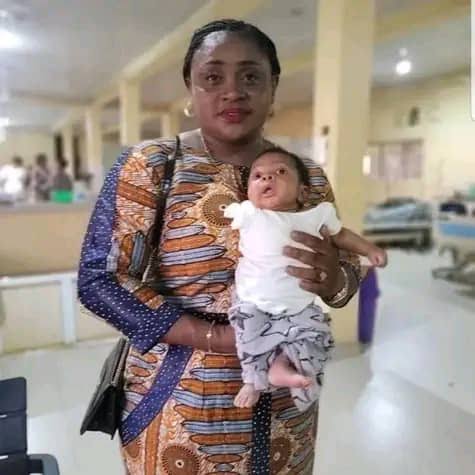 Mr. Amatobi was said to have assaulted little baby, Miracle, with a plastic hanger and broke the baby’s arm for disturbing his sleep.

The incident led to the amputation of the fractured arm at the Pediatrics Ward of the Federal Medical Centre, FMC, Owerri.

NAWOJ, NHRC and the aggrieved mother of the baby made the call for justice in Owerri, the Imo State Capital.

Imo State Chairperson of NAWOJ, Dr Dorothy Nnaji, who spoke to newsmen after visiting the amputated boy at the Federal Medical Centre (FMC) Owerri, confirmed that the injury inflicted by the 31-year old father, a native of Amurie in Isu LGA of the state, led to the amputation of the little boy’s right hand.

Mrs. Nnaji, who frowned at the dastardly cruel act of Mr. Amatobi, expressed shock that a father could assault his innocent child simply because he was crying and disturbing his sleep.

She disclosed that Mr. Amatobi was reported to have repeatedly hit the baby with a plastic hanger to stop him from crying until the right hand broke.

“The perpetrator, Mr. Confidence Amatobi, who hails from Amurie in Isu LGA, used a plastic hanger on the baby, simply because he was crying that the 20-year old mother left to ease herself. He used wood and elastic bands to tie the baby’s hand when he saw that the hand was broken and swollen,” Mrs Nnaji said.

“He locked up the mother and baby to prevent her from talking to neighbours or seeking help. He also took her phone from her. After two days she found her way out and sought help from her neighbours. The guy was arrested by the vigilante but he escaped. By the time help came, the baby’s hand was already decayed. The only option was to cut off baby Miracle’s right hand from the shoulder.”