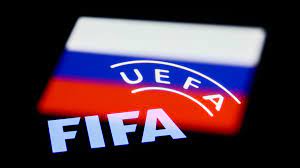 Russia has been expelled from the 2022 World Cup and its teams suspended from all international football competitions “until further notice” after its invasion of Ukraine, FIFA announced in a joint statement with UEFA on Monday.

The men’s team had been due to play in qualifying play-offs in March for the World Cup in Qatar later this year, while its women’s side had qualified for the European Championship in England, to be held in July.

“FIFA and UEFA have today decided together that all Russian teams, whether national representative teams or club teams, shall be suspended from participation in both FIFA and UEFA competitions until further notice,” football’s global and European governing bodies said.

Russia were due to play Poland in a World Cup qualifying play-off semi-final on March 24, and could have gone on to face Sweden or the Czech Republic on March 29 for a place at the finals.

But their three potential opponents insisted they would boycott the matches.

FIFA announced on Sunday that Russian teams would be allowed to continue playing under the name of the Football Union of Russia, playing home games on neutral territory and behind closed doors, and with the Russian flag and anthem banned.

But those measures were dismissed as “totally unacceptable” by Polish FA president Cezary Kulesza, who added that Poland would not play their World Cup play-off with Russia, “no matter what the name of the team is.”

FIFA changed its approach on Monday, kicking Russia out of the sport’s showpiece tournament.

“Football is fully united here and in full solidarity with all the people affected in Ukraine,” the statement added.

“Both presidents (Gianni Infantino and Aleksander Ceferin) hope that the situation in Ukraine will improve significantly and rapidly so that football can again be a vector for unity and peace amongst people.”

Russia were due to play the Netherlands, Sweden and Switzerland in their group at the women’s Euro.

Spartak Moscow had been due to face RB Leipzig of Germany in the Europa League last 16 next month.