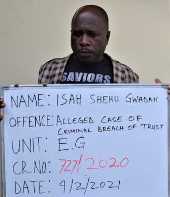 The Kaduna Zonal Command of the Economic and Financial Crimes Commission, EFCC, today, March 9, 2022, arraigned one Isah Shehu Gwadah before Justice Darius Khobo of the Kaduna State High Court, Kaduna on a one count charge of criminal breach of trust and obtaining by false pretence.

The defendant in July 2019, collected N3, 850,000.00 from the complainant to settle the Customs duties of four Toyota Corolla cars, with a promise to share 15% of the profit and repay the money by the end of September 2019.

However, after the payment, the defendant failed to return both the capital and the profit and all efforts to recover the funds proved abortive.

The one count charge reads: “That you Isah Shehu Gwadah sometime in July, 2019 in Kaduna within the Judicial Division of this Honourable Court, dishonestly misappropriated a total sum of N3, 850,000.00(Three Million, Eight Hundred and Fifty Thousand Naira) only property of Moshood Richard Oluwaseun and you thereby committed an offence contrary to Section 293 of the Kaduna State Penal Code Law, 2017 and punishable under Section 294 of the same Law”.

Gwadah however pleaded not guilty to the charge, prompting the prosecuting counsel, M. Lawal to ask the court to fix a date for commencement of trial and remand the defendant.

Justice Khobo, adjourned the case till 23rd March, 2022 for hearing of the bail application and remanded the defendant in the Kaduna Correctional Centre.