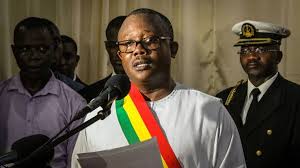 Umaro Sissoko Embaló said a former navy admiral and two of his aides were involved in a well-funded plot to assassinate him, his prime minister and other senior officials.

He said he saw two of the men at the government palace during the coup attempt.

Mr Embaló was leading a cabinet meeting when armed men stormed the compound.

Eleven people were killed, most of them members of the security forces.

Guinea-Bissau is a key transit point in the trafficking of illegal drugs from South America to Europe, leading the UN and US to label it a “narco-state” over a decade ago – the first time that such a label had been given to an African state.