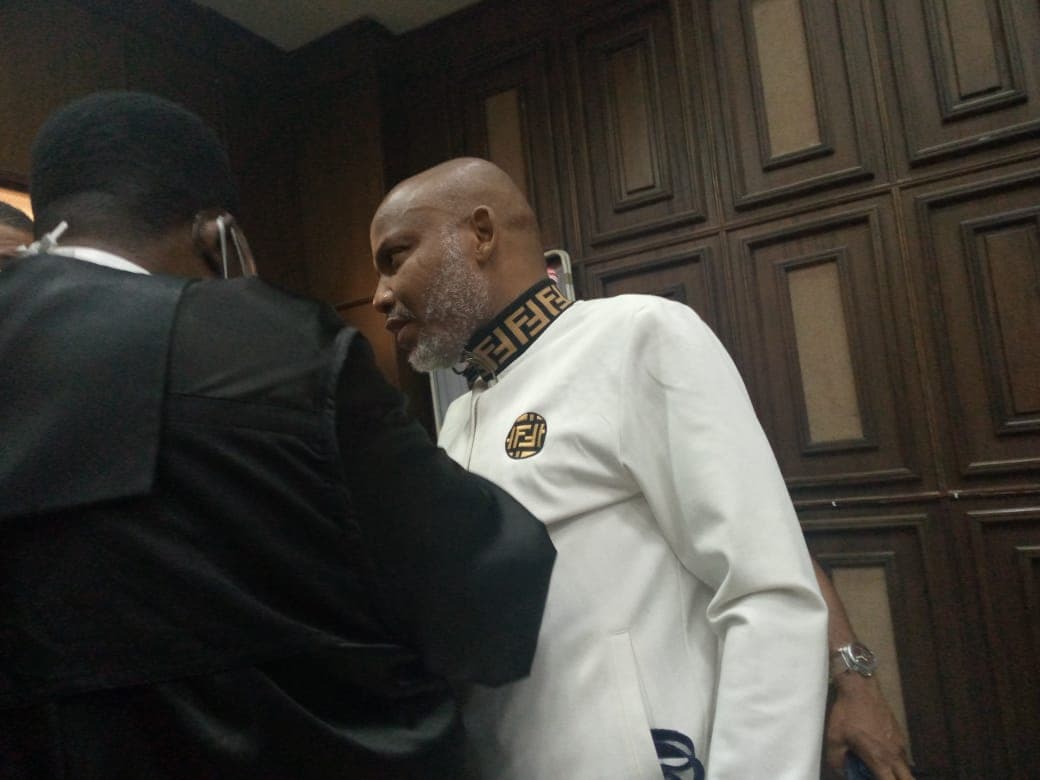 Following the appeal filed by Nnamdi Kanu, the arrested leader of the Indigenous People of Biafra (IPOB), the Court of Appeal in Abuja has reserved the judgment.

After hearing closing arguments from lawyers for the parties on Tuesday, a three-member panel presided over by Justice Jummai Hanatu said they would be informed of the date of the verdict later.

The appellant’s request for bail was not essential to be taken into consideration by the panel because the substantive appeal was ready for hearing.

In a suit marked CA/ABJ/CR/625/2022, seeking to quash the criminal charge on which he is being tried before a Federal High Court in Abuja for the offences of terrorism and treasonable felony.

He wants the appellate court to review the April 8 ruling by Justice Binta Nyako of the Federal High Court, which struck out eight out of the 15 counts contained in the charge.

Kanu is equally praying the court quash the remaining counts and discharge him.

Arguing the appeal on Tuesday, Kanu’s lead lawyer, Mike Ozekhome (SAN) claimed that his client was forcefully abducted from Kenya and illegally renditioned back to the country.

“My lords, he was enjoying this bail without breaching the terms. However, he was in his ancestral home when agents of the respondent invaded his home in September 2017.

“He barely escaped alive by sheer providence and found himself first in Israel and later in London.

“When the appellant travelled from London to Kenya, agents of the respondents, on June 27, 2021, forcefully abducted the appellant, tortured and renditioned him back to the country without following any extradition process.”

Ozekhome argued that by the Doctrine of Speciality, under Section 15 of the Extradition Act, the Federal Government ought to have proceeded to try Kanu on the five-count charge he was initially facing before he escaped from the country.

He contended that Kenya, being the country from where Kanu was arrested and extraordinarily renditioned back to Nigeria, ought to have authorised his extradition.

Ozekhome, who claimed the Federal Government did not deny forcefully moving Kanu from Kenya, argued that the charge appears to give the lower court global jurisdiction over offences that were allegedly committed by Kanu without specifying the location or date the alleged offences were committed.

He added: “There was no need for the lower court to have retained the remaining seven-count charge.

“We are therefore urging my lords to strike out the remaining counts and hold that the respondent has not established any prima-facie case against the appellant for which he could be tried.”

In a counterargument, a lawyer to the Federal Government, David Kaswe, urged the court to dismiss the appeal for lacking in merit.

Kaswe argued that the Fed. Govt complied with the due process of law in bringing Kanu back to Nigeria.

He contended that the charge has been amended seven times owing to Kanu’s conduct.

Kaswe added: “My lords, it took four years and huge resources to get the respondent arrested and brought back to face the charge against him.

“The prosecution is ever willing and eager to proceed with the trial of the appellant.

“We are saying that the trial court was even wrong to have struck out the eight counts as it did.

“It is only after FG has produced all its witnesses and tendered its evidence that the appellant could claim that no prima-facie case was established.

“We urge this court to dismiss the appeal for lacking in merit,” Kaswe said.