Continue To Put Your Trust In APC – Lawan To Nigerians 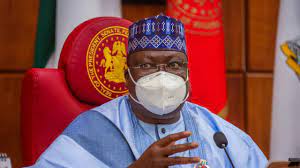 The President of the Senate, Ahmad Lawan has urged Nigerians to continue to entrust the affairs of the country to the All Progressives Congress(APC), stressing that APC is the party to trust.

Lawan made the appeal on Sunday in Lagos at the fifth edition of the empowerment programme of Senator Solomon Olamilekan Adeola who is representing Lagos West Senatorial District.

The event, which was held at the premises of the Nigeria Police College, Ikeja, was also witnessed by the Lagos State Governor, Babajide Sanwo-Olu.

In a statement by the Special Adviser on Media, Ola Awoniyi which was made available to journalists, Lawan described Lagos as a home for APC and expressed the confidence that “APC, by the Grace of God, will continue to rule Lagos and rule Nigeria.”

“All that we need to do is to continue what we are doing now. Support our leaders. Tolerate us. Unite ourselves and of course, remain focused.

“PDP may tell you something funny about the administration of APC at the national level but PDP ruled Nigeria for 16 years and all that they did was to leave and bequeath so many challenges to us in 2015.

“We are dealing with those challenges one after the other and if on the way, we encounter new challenges, we are equal to the task.

“By the Grace of God, we are going to turn around the fortunes of this country for the better. We have done so much but we are also challenged especially in the area of security.

“When someone tells you that the APC administration only takes loans or borrow money, PDP had 16 years of so many resources and they did very little infrastructure in the country if any. The money disappeared and our options are limited.

“But one option that is not on the table at all is not to do anything. Because you don’t have money, so we shouldn’t develop your country? Nigeria’s administration at the national level is responsible and responsive.

“We wouldn’t like to take loans or borrow money but when the options are limited and the imperative of development of infrastructure in the country is there, what do we do?

“This is to tell you that we desire to develop our country and that APC at all levels deserves the trust of Nigerians because we will always tell Nigerians what it is. We won’t hide anything because you gave us your trust.

“What you witness in Lagos is to tell you one of the best the APC can do and we have many APC states that are working so hard to develop those states.

“I want to assure Nigerians that APC as a political party is the one that you can trust because, for us, the citizens of this country are the most essential elements and people that we must always focus on,” Lawan said.

The Senate President urged Lagosians to consider Governor Sanwo-Olu for another term based on his commendable performance.