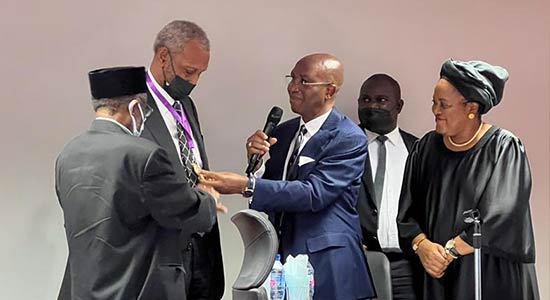 He said; “To me, it will be an understatement to posit that I am humbled, honoured and ecstatic at the matchless and remarkable opportunity afforded me to lead and pilot the affairs of the Body of Benchers for the next one year, having been elected as the Vice-Chairman on 25th March, 2021. I am more reflective and inspired when I consider that my predecessors-in-office include the forebears and pathfinders of our noble profession, starting from the first indigenous Chief Justice of Nigeria, Honourable Justice Adetokunbo Ademola, GCFR; who was immediately succeeded by that sage Jurist and scholar, Honourable Justice Taslim Olawale Elias, GCON; followed by another exceptional and outstanding Jurist in the person of Sir Danley Alexander, KBE; who was succeeded by the cerebral advocate and consummate Jurist, Honourable Justice Augustine Nnamani, SAN, JSC, who, after his turn, handed over to the legendary and venerable Jurist, who later served as Chief Justice of Nigeria, Honourable Justice Mohammed Bello, GCON.

This linear ambit of excellence continued all the way through to my five most recent predecessors-in-office amongst who are the irrepressible former Chief Justice of Nigeria, Honourable Justice Walter Samuel Nkanu Onnoghen, GCON, who passed the baton to that astute leader of the Bar, Alhaji Bashir M. Dalhatu; who in turn relinquished the helm of the Body to the highly revered Honourable Justice Dr. I.T. Muhammad, CON, now Chief Justice of Nigeria; who yielded the mantle of the Body to that Bar leader per excellence and former President of the Nigerian Bar Association (NBA) in the person of O.C.J. Okocha, MFR, SAN, who, at the end of his incumbency, entrusted the affairs of the Body to the distinguished and amiable Honourable Justice Olabode Rhodes-Vivour, CON, JSC (Rtd.), a personal friend and brother. I pay my profound respect and homage to all my forty-nine predecessors-in-office, both dead and living, and, on behalf of the Body of Benchers, appreciate them for their noteworthy contributions to the foundation, growth, nourishing, maintenance and sustenance of this great Body.”

“I have always given my all to the legal profession, whether as a practicing lawyer in court rooms across the length and breadth of the country; or as Secretary and later Chairman of a Branch of the NBA; or as Attorney-General and Commissioner for Justice in the old Ondo State; or as a Member of the General Council of the Bar; or as a Member of the Legal Practitioners’ Privileges Committee; or as the President of the NBA; or as the Acting Chairman of the Council for Legal Education; or as a two-time Member of the National Judicial Council; or as a Member of the Stakeholders’ Committee for the Reform of the Judiciary set up by the then Chief Justice of Nigeria, Honourable Justice Dahiru Musdapher, GCON to address the daunting problems and challenges afflicting the nation’s Judiciary; or as a Member of the Body of Benchers since 1992; or as a Life Bencher since 2007; or as the pioneer Chairman of the Mentoring Committee of the Body of Benchers; or as the Vice-Chairman of the Body of Benchers, doubling as the Chairman of the Screening Committee. Even outside the profession’s noble precincts, I have been privileged to head and direct the affairs of established and enshrined institutions in various capacities, including (as): the Pro-Chancellor and Chairman of Council of Nigeria’s Premier University, the University of Ibadan (a University that, as at then, had over three hundred Professors), between 2009 – 2013; Chairman, Court of Governors, College of Medicine, University of Ibadan, between 2009-2013; the Pro-Chancellor and Chairman of Council of Ajayi Crowther University, Oyo, Oyo State, from 2014 till date; and pioneer Chancellor of the Ekiti State owned Bamidele Olumilua University of Education, Science and Technology, Ikere (BOUESTI), from 2021 till date. In whatever position I found myself, I have always striven to represent our noble profession as an ambassador and exemplar, displaying the learning, good character and virtues which the law profession is reputed for, to the admiration of the non-legal communities.”

In addition, he tasked members of the Body of Benchers to join hands with him to address the myriad of challenges facing the Nigerian legal profession at the moment. According to him, this may necessitate more meetings than the statutory three meetings in a year.

“We must not lose sight of the unpleasant happenings around us, whether from the Bar and Bench. Succinctly surmised, our profession is under aggression and attack, both from within and without. These are not the best of times for the legal profession in Nigeria.”