2023 Presidency: We’re Not Ganging Up Against Atiku – PDP Governors, Saraki 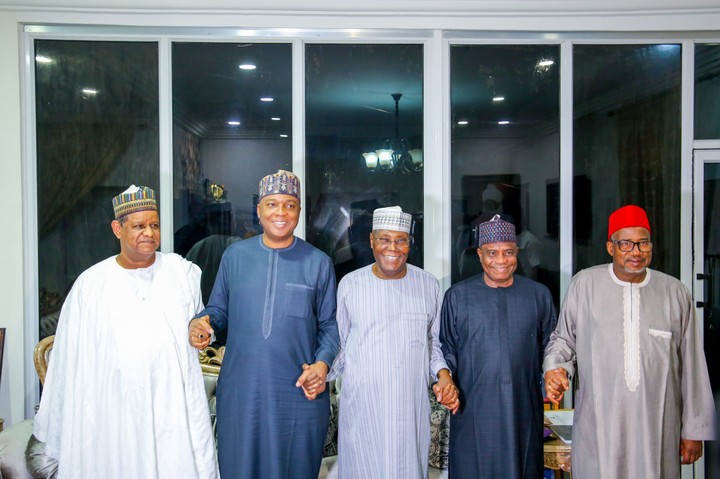 Governors elected on the platform of the Peoples Democratic Party (PDP) have said there is no gang up against former Vice President Atiku Abubakar on the issue of who becomes the presidential flagbearer of the party for the 2023 general elections.

Atiku, who was the presidential candidate of the PDP in the 2019 general elections, on Monday night in Abuja met with some presidential aspirants in the party over issues relating to zoning the party’s 2023 presidential ticket and the need for a consensus candidate.

Atiku while speaking after the meeting, disclosed that they discussed the future of PDP and Nigeria.

The former vice president in a post on his Facebook account wrote, “I had a meeting tonight with Saraki, Tambuwal, Bala and Hayatudden to discuss the future of our party and Nigeria. I look forward to continuing our dialogue and building #OneNigeria.”

He wrote, “We visited former Vice President Alhaji @Atiku Abubakar to consult with him on our ongoing discussions about consensus building in our great party, @OfficialPDPNig”.

Speaking with our correspondent, a chieftain of the PDP, who was part of the meeting at Atiku’s residence said the PDP governors and other presidential aspirants went to brief Atiku on their discussions on the issue of consensus arrangement.

“If you notice events in the last couple of days, there have been talks of an alleged gang up against Atiku. On the day, he formally declared to contest for the presidential election in 2023, the PDP governors were in Abia State where they had a meeting to deliberate on the state of the nation. Some people misinterpreted it to mean they shunned his declaration. That is not true.

“Also, the other presidential aspirants have been meeting on the issue of consensus candidacy so that there won’t be crisis if any of them emerges as the flagbearer. If you recall, Saraki had earlier met with Governor Samuel Ortom of Benue and Taraba State governor, Darius Ishaku, few days ago where he said without an early consensus, choosing a suitable presidential flagbearer may result in a ruckus in the party as all the aspirants are qualified.

“He then promised to meet with Atiku on the same issue where he stressed the need to forge a consensus as a way to bring unity to our party. That was what happened on Monday night.

“They only went to brief Atiku so that it does not seem they are ganging up against him. That is why they even got Mohammed Hayatudeen, a bridge aspirant to join them.

“Tambuwal is the chairman of the PDP Governors’ Forum and he represented his colleagues at the meeting. He made it clear at the meeting that the governors had nothing against Atiku by not attending his presidential declaration. It was just a coincidence that the two meetings happened simultaneously on the same date”, he said

You Have To Answer For Timothy Adegoke’s Murder, Court Tells Adedoyin, Others