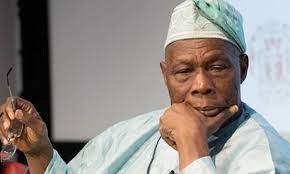 A chieftain of the All Progressives Party (APC), Osita Okechukwu, has mocked the Peoples Democratic Party (PDP) over former president Olusegun Obasanjo’s refusal to rejoin the party, ahead of next year’s general election.

PDP National Chairman, Iyorchia Ayu, led a team and visited Obasanjo in his Ogun State residence to appease him to rejoin the party.

Obasanjo said: “I have been with the party right from inception. Whatever I do in life, because I became president on the platform of PDP, PDP will continue to be part of the history of my life.

“But, having said that, the day that in my ward I decided to tear my PDP card was the day I ceased to be a member of PDP and that day I vowed that I will not be a member of any political party again, but I will remain a statesman in Nigeria, in West Africa, in Africa and, indeed, in the world.”

Okechukwu, while addressing newsmen yesterday in Abuja, described Obasanjo’s stance “as a signal to another defeat in 2023 presidential election.”

According to him, it was a smack of political incorrectness for a party, whose membership card was publicly shredded to go back asking for the support of the same statesman that rejected its association.

The director-general of Voice of Nigeria, said: “I have my sympathy for our sister political party, PDP, over this misadventure. Just imagine the uncommon electoral boost the party would have generated if Obasanjo had accepted their request.

“The statesman’s re-entry could have boosted the morale of the rank and file of the PDP. In short, the rejection is a bad omen, particularly coming at the eve of the crucial 2023 presidential election.”