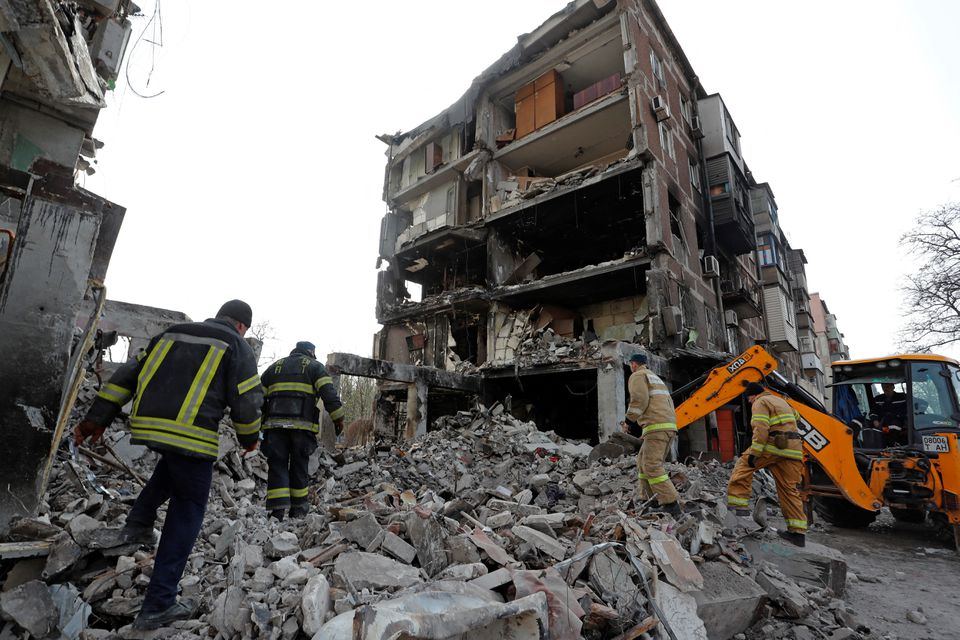 Physical damage to Ukraine’s buildings and infrastructure from Russia’s invasion has reached roughly $60 billion and will rise further as the war continues, World Bank President David Malpass said on Thursday.

Malpass told a World Bank conference on Ukraine’s financial assistance needs that the early estimate of “narrow” damage costs does not include the growing economic costs of the war to Ukraine.

“Of course the war is still ongoing, so those costs are rising,” Malpass said.

Ukrainian President Volodymyr Zelenskiy, in a virtual address to the conference, outlined far bigger costs and financing needs. He told participants in interpreted remarks that Ukraine needs $7 billion per month to make up for economic losses caused by Russia’s invasion of his country.

“And we will need hundreds of billions of dollars to rebuild all this later,” Zelenskiy said.

He said the global community needed to exclude Russia immediately from international financial institutions, including the World Bank and the International Monetary Fund and others, and said all countries “must immediately be prepared to break up all relations with Russia.”

The conference on the sidelines of the IMF and World Bank spring meetings included finance officials from a number of countries, including U.S. Treasury Secretary Janet Yellen, who earlier said the United States would double its direct non-military aid pledge to $1 billion.

Zelenskiy said called for countries that have imposed sanctions and freezes on Russian assets to use that money to help rebuild Ukraine after the war and to pay for losses suffered by other countries.

At a news conference, Yellen said Russia should shoulder some of Ukraine’s rebuilding costs.

“It’s clear that the rebuilding costs, ultimately, in Ukraine are going to be enormous,” Yellen said.

Looking “to Russia one way or another to help provide some of what’s necessary for Ukraine to build is something I think we ought to be pursuing.”

But she cautioned that using seized Russian central bank reserves in the United States to rebuild Ukraine would be a “significant step” that would need discussions and agreement with international partners.

“It’s one that you would carefully need to think through the consequences of,” Yellen said. “I wouldn’t want to do so lightly.”

Ukrainian Prime Minister Denys Shmyhal, who attended the conference in person, said Ukraine’s GDP could decline by 30% to 50%, with direct and indirect losses totaling $560 billion so far. That total is more than three times the size of Ukraine’s economy, at $155.5 billion in 2020, according to World Bank data.

“If we do not stop this war together, the losses will increase dramatically,” Shmyhal said, adding that Ukraine would need a rebuilding plan similar to the post-World War Two Marshall Plan that helped to rebuild a war ravaged Europe.