Why Buni Was Absent At National Headquarters – APC 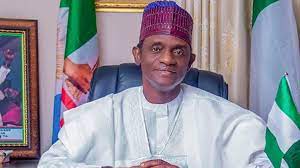 The ruling All Progressives Congress (APC) has given the reason the Chairman of the Caretaker/Extra-ordinary Convention Planning Committee (CECPC) and Governor of Yobe State, Mai Mala Buni, was absent at the national headquarters.

Governor Abubakar Sani Bello of Niger State presided over a meeting of the committee held on Monday at the party National Secretariat in Abuja in Buni’s absence.

In a chat with newsmen after the meeting, Secretary of the committee, Senator John James Akpanudoedehe, said Buni was absent due to medical reasons.

Also speaking with reporters, Sani Bello said he has been the acting chairman of the party for a while since Buni travelled out of the country.

He said: “I have been acting chairman for a while since the chairman (Buni) travelled.”

“We discussed the progress made so far on convention and what needs to be done next so that we will achieve the March 26 date for the convention.”