US Economy Grows At Fastest Pace In Decades 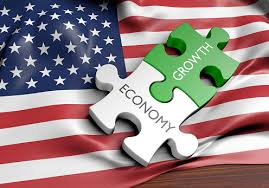 The US economy expanded at its fastest rate in decades last year as it roared back from pandemic lockdowns.

Official figures from the Commerce Department showed the economy grew by 5.7% – its best performance since 1984.

But analysts are expecting growth to slow this year, as the government scales back stimulus spending and the Federal Reserve raises interest rates.

Other risks include high inflation and threats from new Covid variants, such as Omicron.

The World Bank is predicting the US economy will grow by 3.7% this year, in line with other forecasts.

“The Omicron wave means the economy is starting 2022 on a much weaker footing and we expect growth to disappoint over the rest of this year too,” said Andrew Hunter, senior US economist at Capital Economics.

Consumer spending and government stimulus helped power the rebound from 2020, when gross domestic product contracted by 3.4% as the pandemic struck.

The labour market has now regained some 19 million of the 22 million jobs lost amid shutdowns that year.

Output remained robust in the final three months of the year, when it grew at a better-than-expected annual rate of 6.9%.

President Joe Biden hailed the figures, saying they were “no accident” but rather driven by the government’s recovery efforts.

As pandemic stimulus winds down, he urged Congress to move forward with additional spending plans focused on areas such as renewable energy, manufacturing and child care.

But with Mr Biden’s agenda currently stalled in Congress, the economy is likely to have to perform without that boost – and with less help from America’s central bank.

On Wednesday, Federal Reserve chair Jerome Powell signalled officials were planning to raise its key interest rate in March for the first time since 2018, saying the economy no longer needed extra-low borrowing costs put in place in 2020 to help it along.

“The defining challenge for the economy in the next year or two will be how well we can sustain growth not just in the absence of fiscal policy, but in the face of tightening monetary policy,” Wells Fargo economists wrote in a research note.

The Fed is under pressure to tackle inflation as the US sees prices rise at their fastest rate in nearly 40 years.

Bank officials had initially said the pressures would be transitory and fade as the world moved past supply chain problems triggered by the virus – something that has proved to be far more difficult than hoped.

Some analysts say the Fed has already moved too slowly to respond to the issue, while others fear the bank will move too aggressively, and the higher borrowing costs will reduce demand by more than expected.

US stock markets have seen three consecutive weeks of declines amid the concerns, as well as more recent data suggesting a slowdown as Omicron hit at the end of December and January.

“Today’s figures measure GDP up until the end of December 2021, excluding some of the recent surges in Covid-19 cases,” said Richard Flynn, managing director at Charles Schwab UK.

“Indeed, there’s been weakness across US stock indices in the first weeks of 2022, as investors digest some of the risks facing the economy: receding monetary and fiscal liquidity, persistent effects from the pandemic, and a rise in inflationary pressures.”