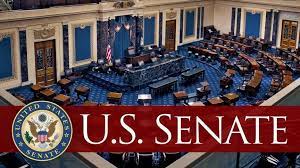 The legislation comes in the wake of a Wall Street Journal report in September, which revealed that 131 federal judges failed to recuse themselves from cases involving companies in which they or their family members owned stock.

The Courthouse Ethics and Transparency Act would establish a 45-day window for judges to report stock trades of more than $1,000 and require the judiciary to post disclosure forms online.

The Senate approved the bill on unanimous consent. It must now be passed by the House, which in a rare show of bipartisanship approved a companion bill in December that had slight differences on a 422-4 vote.

Gabe Roth, executive director of the judicial reform advocacy group Fix the Court, said the bills had “minor” differences and that, if he had to guess, the House would most likely try to pass the Senate’s version.

“I look forward to these important transparency and disclosure provisions becoming the law of the land,” Republican U.S. Senator John Cornyn of Texas, one of the bill’s sponsors, said in a statement.

The Administrative Office of the U.S. Courts, the judiciary’s administrative agency, had no comment. The White House did not respond to requests for comment. Judiciary officials have said they are looking at ways to improve how the judiciary handles financial disclosure reports.

The bill’s passage came as Congress mulls adopting broader legislation that could restrict stock trading by lawmakers — a measure that House Speaker Nancy Pelosi, a Democrat this month said would need to cover the judiciary as well.

The bill the Senate passed Thursday would amend the Ethics in Government Act of 1978 to require judges to submit securities transactions reports in line with other federal officials under the STOCK Act.

That law requires government officials to report securities transactions worth more than $1,000 within 45 days.

The legislation also calls for the Administrative Office to create a searchable publicly accessible online database of judicial financial disclosure forms posted within 90 days of being filed.

The Senate’s bill differs from the House version by allowing the judiciary the ability to delay implementing the database if it needs to and by applying the disclosure requirements to bankruptcy and magistrate judges, as well as to district and appellate court judges.