Terrorism: Group Calls For Investigation And Arrest Of Shiekh Gumi 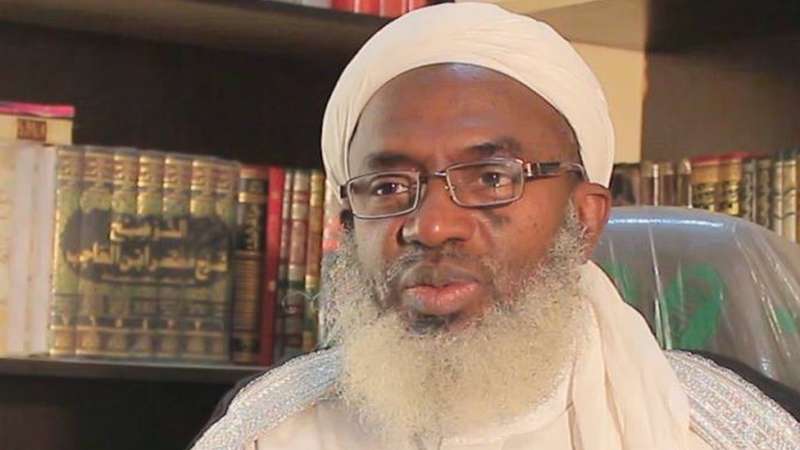 The Coalition for Peace in Nigeria (COPIN), a civil society organization, has urged the Department of State Services (DSS) to arrest Sheikh Ahmad Abubakar Gumi, an Kaduna-based Islamic cleric, for allegedly having a relationship with terrorists and bandits, as soon as possible.

Gumi should typically be a person of interest, according to COPIN, given his open friendship with bandits and kidnappers which pose a threat to national security and his constant requests for the federal government to grant the terrorist elements amnesty.

In a statement jointly signed by the National Coordinator, Pharmacist Emeka Akwuobi, and Hajiya Fatih Yakub National Secretary, the peace advocacy group said Gumi has a lot of explanations to offer on the activities of bandits, especially those operating within the North West general area.

While commending the secret service on the professional manner it has handled the arrest of an acclaimed kidnapped Abuja/Kaduna train passengers’ negotiator, Tukur Mamu, the group insisted on the immediate arrest, interrogation and prosecution of the Islamic scholar.

“This is more so that Mamu, the bandits’ negotiator, is the undisputed spokesperson for the Kaduna-based influential Islamic cleric”, COPIN said in the statement.

The group further noted that apprehension of Gumi is fundamental to a peaceful election, considering the fact that he will provide the Service with credible/actionable intelligence on the actual locations, and modus operandi of the terrorists, culminating in their arrest.

The group threatened to organise a peaceful protest in Abuja, and other cities, should the intelligence agency fail to invite Gumi for interview.

The statement reads in full: “We have watched with keen interest the provocative tendencies of Sheikh Gumi, especially as they relate to the activities of bandits/terrorists operating within the the North West general area.” “We note, with concern, Gumi’s call for grant of amnesty to terrorists, who have killed and maimed thousands of urarmed civilians, including women and children. “Of particular interest is the kidnap of over one hundred Abuja/Kaduna train passengers by the terrorists in April this year, many of whom are still being held under terrible conditions. “As a peace advocacy group, we condemn all these evil acts perpetrated by the terror group, and other enemies of state operating under whatever name, as we insist that nobody, or group has the right to take arms against the State, regardless of their grievances.

“Consequently, we demand the immediate arrest and interrogation of Gumi who, by now, should be a person of interest to all intelligence and law enforcement agencies.”

“We will not hesitate to mobilise for peaceful protests in strategic cities, including Abuja, if the DSS fail to invite the Islamic Cleric for interview on all he knows about bandits/terrorists holding the North West states, and parts of North Central, to ransom.”

“Finally, we wish to commend the DSS over the way and manner they have continued to handle Gumi’s spokesman and negotiator, Tukur Mamu, since he was returned to the country from Cairo, Egypt, last week.”

“We say the decision to approach a Federal High Court in Abuja for permission to hold him for a certain period, pending conclusion of investigation, shows that the DSS is a law-abiding agency”.