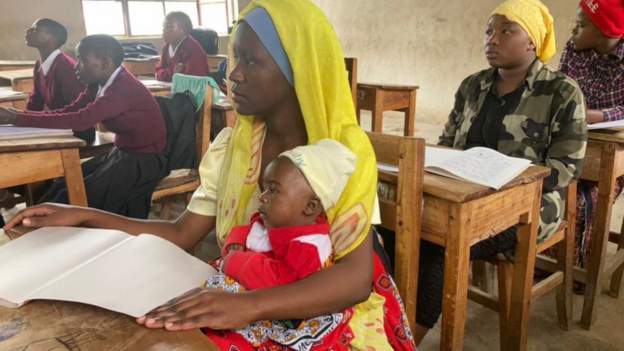 Tanzania’s Education Minister Adolf Mkenda says the government’s decision to allow students to continue with their education after giving birth does not mean they can bring their babies into class.

His comments come after the BBC featured a teenage mother in Mbeya region being allowed to bring her four-month-old into school this week.

Esnath Gideon, 19, was pictured with her daughter on her lap at a desk. She told the BBC she had no choice as there was no-one to take care of her child at home.

But Prof Mkenda said having babies in the classroom would disturb other students.

Schoolgirls in Tanzania who became pregnant used to be expelled from school and not allowed back. This 19-year-old directive was revoked last December – and has led to several teenage mothers returning to finish their education.

Some of them have enrolled under a programme known as Alternative Education Pathway, which is said to be more flexible.

A solution to Ms Gideon’s problem has been proposed to the government as part of recommendations by education experts looking into the return of teenage mothers into education.

They suggest setting up baby day care centers for those unable to find alternative help, an education educator said.