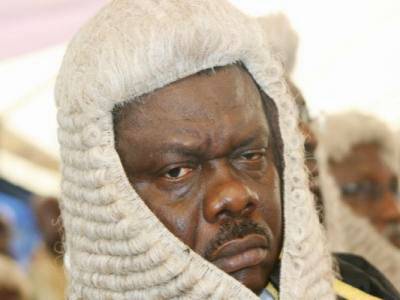 A former Attorney-General of the Federation and Minister of Justice, Michael Aondoakaa, a Senior Advocate of Nigeria, has been barred from holding public office in the country for life.

Justice Kudirat Kekere-Ekun of the Supreme Court in a unanimous judgment delivered on December 10, 2021, affirmed a judgment of the Court of Appeal, Calabar division, which had earlier upheld a Federal High Court decision that barred the former Minister under late President Umaru Musa Yar’Adua’s administration from occupying public office in Nigeria.

In the Court of Appeal’s judgement on June 1, 2010, Justice A.F.A. Ademola ordered, “1. A declaration is hereby made that the 2nd Defendant undermined and subverted the rule of law, the due administration of justice and integrity of the judiciary in the letters of 8th January, 2008 and 16th February 2009 written by him in the capacity of the Defendant.

“2. A declaration is hereby made that 2nd Defendant is not a competent, fit and proper person to hold office as the 1st Defendant having regards to the oaths of Allegiance and office.

“4. A perpetual injunction is hereby made restraining the 2nd Defendant from occupying/holding the office of the Attorney General of the Federation and Minister of Justice and public offices in the Federal Republic of Nigeria.”

But In the matter titled, SC.939/2015, Aondoakaa had asked the Supreme Court to upturn the judgment delivered by Appellate Court on September 3, 2015.

The five-man judicial panel at the Supreme Court, which also awarded N2million against the appellant in favour of the 1st respondent (Emmanuel Obot), were Justices Mary Peter-Odili, Kekere-Ekun, Mohammed Lawal Garba, Ibrahim Saulawa and Emmanuel Agim.

A 58-page certified true copy of the judgment stated that, “The appellant (Aondoakaa), as the Chief Law Officer of the Federation and a Senior Advocate of Nigeria to boot was reckless and acted in a manner most unbecoming of the occupant of such an exalted office.”

Aligning with position held by Justice Olubunmi Oyewole in the Court of Appeal judgment, Kekere-Ekun quoted reasons advanced by the lower court in its decision.

Oyewole was of the view that “The fact leading to this appeal captured a most sordid low in administration of justice in this country.

“It is unthinkable that the occupier of the exalted office of Attorney General would subvert the ends of justice, as was crudely done in this case by the appellant. Public office is a sacred trust and an Attorney General should epitomize all that is good and noble in the legal profession. That office should never again be occupied by individuals of such poor quality as the appellant.

“It is ironic that the appellant should approach the same temple he so brazenly desecrated for succor against the consequences of his appalling conduct.

“To restore the dignity of the legal profession and reinforce the confidence of the administration of justice. The Nigerian Bar Association is invited to the facts of this case and the judicial reactions thereto and subject the appellant to its appropriate disciplinary processes.”

The facts prompting the litigations, which had dragged on for 15 years, is traceable to the People’s Democratic Party primary election held in December 2006 for nomination of candidate for Uyo Federal Constituency of Akwa Ibom State for the general elections of April 2007.

Obot, who emerged winner of the primary election, was substituted with the name of Bassey Etim after he (Obot) was “duly presented to the Independent National Electoral Commission (INEC) as the PDP candidate.”

On December 12, 2007, the Court of Appeal, Calabar division in appeal numbered CA/C/45/2007 delivered judgment in favour of Obot, ordering the President of the Court of Appeal to set up a new Tribunal to adjudicate over Obot’s petition in Uyo.

Notwithstanding Aondoakaa’s letter, the President of the Court of Appeal went ahead by setting up a new panel of judges in compliance with the order of the court.

The new panel gave judgment on April 18, 2008 that Obot be sworn into the House of Representatives as the member representing Uyo Federal Constituency, and Etim’s appeal to the Court of Appeal was dismissed with an order that INEC should issue Certificate of Return to Obot.

Curiously, though by virtue of Section 246(2) of the 1999 Constitution, as amended, the decisions of the Court of Appeal are final regarding appeals emanating from National and State Houses of Assembly elections, the former AGF wrote to the then chairman of INEC, Maurice Iwu, urging him not to obey the judgment of the Court of Appeal, which he described in the letter as “obvious desecration of the institution of the judiciary.”

At the same time, he also wrote to the Speaker of the House of Representatives advising him to disregard the judgment but “to allow the status quo ante to remain until the last word is heard from the Supreme Court.”

Consequent upon Aondoakaa’s letters to the INEC chairman and the Speaker of the House of Representatives, Obot was not issued Certificate of Return nor sworn into the office he was elected to serve the people of Uyo Federal Constituency, hence he slammed a law suit on May 15, 2009 against the then AGF in his personal and official capacity at the Federal High Court, Calabar division through his lawyer, Uwemedimo Nwoko (SAN).

Sudan Sends Delegation To Russia For Talks On Cooperation