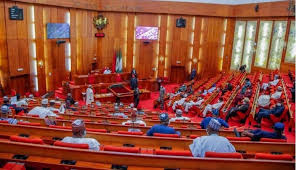 In his presentation, Chairman of the Committee, Smart Adeyemi (Kogi West) said the bill, which was passed on Wednesday, seeks to repeal NAMA Act 2010 for the purposes of providing effective air navigation services in Nigeria. He said that the bill is one of the six Aviation Executive Bills referred to the Committee by the Senate which are related to crucial matters of regulation, training, management, and safety of the Aviation Industry.

He said that the Act establishing NAMA came into effect on May 26, 1999, and has been in operation for twenty-two years but that the amendments to the 2010 Act are geared towards aligning the Agency to meet new operational requirements in the industry as stipulated by the International Civil Aviation Organisation.

“The issues that surround the Bill are significant in ensuring safe air travels and are part of efforts at enhancing the health and profitability of the overarching aviation sector and public benefit”, he said.

Meanwhile, the Federal Airports Authority of Nigeria (FAAN) has said that commercial motorcycling around the Murtala Muhammed International Airport, Lagos has been prohibited and the entire axis is safe.

The General Manager, Corporate Affairs, Henrietta Yakubu,  said that reports claiming that there is looming insecurity in the airport is false, insisting that all Nigerian airports are safe.

“FAAN will like to inform the general public that there is no looming insecurity in Murtala Muhammed Airport and re-emphasise that commercial motorcycling around the airport axis has been prohibited, and remains so, as indicated by the various signages within and around the airport corridor.

“Enforcement of this policy has also been intensive and comprehensive. In the year 2021, a total of 69 motorcycles were confiscated and transferred to the Lagos State Government for crushing by the Aviation Security Department. Additionally, a good number of motorcycles have been seized again and will soon be transferred to Lagos State Government for crushing.

“FAAN has a standing committee comprising officials from AVSEC and other security agencies that are constantly patrolling to arrest erring operators, with a view to putting a final stop to this menace. Finally, while we reassure our customers that the Murtala Muhammed Airport is safe and secure, we also plead with our esteemed stakeholders to please desist from deliberately spreading false and misleading information about our airports and our industry. It is not in our national interest,” Yakubu said.

Fuel Subsidy: ”Give Me Time To Make Consultations” – Lai Mohammed