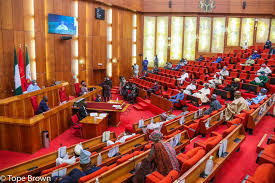 Mrs Ilobah Isabella Ugochi on Wednesday assumed duty as the acting Clerk of the Senate.

Before her new role, Ugochi was the Deputy Clerk of the Senate (Legislative).

She assumed the new position following the retirement of the former Clerk, Ibrahim Dauda El-Ladan.

El-Ladan had on Tuesday defied retirement and performed official duties at the Senate plenary against the directive of the National Assembly Service Commission (NASC).

The Commission had written to El-Ladan, asking him to proceed on retirement from February 6, 2022.

NASC chairman, Ahmed Kadi Amshi, in a letter addressed to El-Ladan had asked him to hand over his office and other government property in his possession to the Deputy Clerk, Senate (Legislative), Ugochi.

Despite the communication, the retired clerk refused to vacate his seat.

During the plenary on Tuesday, El-Ladan carried out official functions in the Senate Chamber.