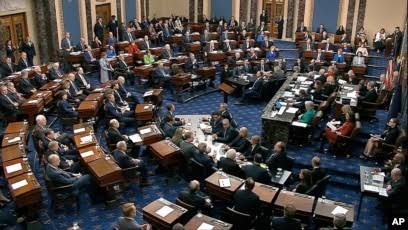 Last night, the U.S. Senate failed to overcome the 50-vote threshold to change the body’s rules and permit a vote on voting rights protections after each senator has been allowed a maximum of two speeches of any length of time.

The U.S. Senate failed to stand up for the fundamental right to vote of all Americans and dealt a seismic blow to our democracy by defending an archaic rule at the expense of American voters, particularly voters of color. Allowing a minority of politicians to block essential voting rights legislation supported by a majority of Americans and a majority of U.S. senators is unacceptable and indefensible given the history of this country. This same repressive political maneuver was used to delay enactment of the original 1965 Voting Rights Act.

Only 15 years ago the Voting Rights Act enjoyed the bipartisan support it deserves with legislation approved by 98 senators and signed into law by President George W. Bush. Even U.S. Sen. Strom Thurmond, who led the 1957 filibuster against the Civil Rights Act, later voted to renew the Voting Rights Act.

As the nation recently celebrated Martin Luther King Jr. Day, Dr. King’s words from 1963 unfortunately still hold true today: “I think the tragedy is that we have a Congress with a Senate that has a minority of misguided senators who will use the filibuster to keep the majority of people from even voting. They won’t let the majority senators vote. And certainly, they wouldn’t want the majority of people to vote, because they know they do not represent the majority of the American people. In fact, they represent, in their own states, a very small minority.”

With this essential voting rights legislation now blocked at the federal level, it becomes more important than ever for the Department of Justice to act against discriminatory anti-voting laws – and for activists and grassroots organizations to protect and advance voting rights through every tool we have in our communities. We must channel and harness the activism of our forefathers to realize the dream that they struggled for.

The Southern Poverty Law Center remains firmly committed to defending and advocating for voting rights. We are challenging Georgia and Florida for creating barriers to voting and suing Georgia and Alabama for diminishing the voices of communities of color through unfair and discriminatory voting maps. Furthermore, we will continue to fund grassroots efforts to engage voters and promote ballot access through our Vote Your Voice Program.

We call on everyone who values democracy to join us in this great struggle for voting rights by condemning voter suppression and political violence whenever and wherever you see it, standing up to the enemies of democracy at all levels, and advocating for just laws and representatives in government who will defend our voting rights.