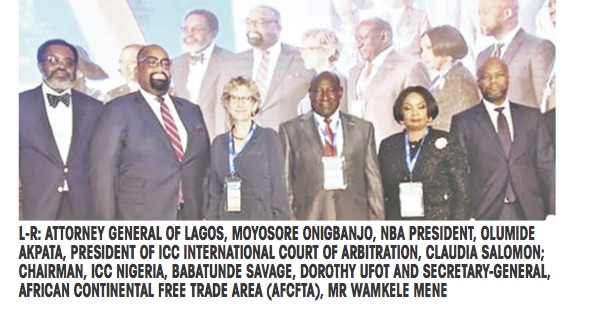 Many stakeholders, including the Lagos State Governor, Mr Babajide Sanwo-Olu, the Nigerian Bar Association (NBA), the International Chamber of Commerce (ICC) , among others, are joining the push for the maximization of the arbitration for better economy.

Arbitration’s many benefits have made it a preferred method of settling disputes all over the world especially among commercial businessmen.

All these and many more were the subject matter at the Sixth Africa Conference on International Arbitration, organised by ICC in partnership with NBA in Lagos.

The three-day conference with the theme, “African Arbitration: Consolidation and Transformation” was held at the Eko Hotel, and highlighted key notes on the importance as well as obstacles facing the growth and transformation of arbitration in Nigeria and across the world.

Sanwo-Olu who was among the special guests of honour at the occasion, while elaborating on many benefits of arbitration and some bottlenecks affecting its maximisation for better economy, used Lagos State as case study. He noted that the state stands out in arbitration in Nigeria, affirming that the Lagos Court of Arbitration (LCA) formed an integral part of the state’s commitment to promoting and upholding the rule of law.

Sanwo-Olu, who was represented by the state Attorney-General and Commissioner for Justice, Mr. Moyosore Onigbanjo (SAN), said that Lagos remained an arbitration-friendly destination.

He praised the Nigeria’s arbitration community for the Arbitration and Mediation Bill awaiting assent by President Muhammadu Buhari.

Sanwo-Olu said: “In addition to enhancing the Arbitration Law (Laws of Lagos State), the state established Lagos Court of Arbitration (LCA), National Centre for Arbitration and ADR, as a dispute resolution hub with the aim of promoting and servicing domestic, regional, continental and international commercial dispute industry, with a full complement of ADR services.”

According to the governor, the state’s judiciary had partnered with the LCA in helping to ensure prompt out-of-court resolution of disputes.

“LCA is an integral part of our promise to promote the rule of law built as a pillar for economic development, not just in Lagos but in Nigeria and Africa in general,” he added.

He stated that the state is a major commercial hub, holding about 65 per cent of Nigeria’s total industrial investment and foreign trade and such commercial activities could generate arbitration activities.

“Africa is currently an attractive investment destination, and influx of foreign investors who insist on arbitration as their preferred dispute settlement mechanism has increased international commercial arbitration,” he said.

Sanwo-Olu, however, urged the ICC conference to address issues such as challenges of arbitrating in Nigeria and what a country must do to become an attractive destination.

Mene, who was also among the special guests of honour, in his own analysis on many gains of arbitration to African Continent and the challenges delaying its progress, disclosed that the organisation was in the process of setting up an ADR mechanism to handle the expected huge volume of commercial disputes, with an enforcement capacity, like the World Trade Organisation across the continent.

He explained that it would comprise a court of first instance, a court of final instance and a dispute settlement body comprising all state parties to the AfCFTA.

“So in the African Continental Free Trade Area for the very first time, we have negotiated an instrument for the development of trade and investment disputes that includes an enforcement capacity that will require governments to bring their measures into conformity with outcomes of a ruling of a panel.

“This is truly a transformative moment in the economic and trade history of our continent.”

In his own contribution, President of NBA, Olumide Akpata, charged Nigerian lawyers to get the required competence in arbitration, adding that there is a lot to gain in the practice and lawyers should not left out.

He noted that International arbitration served as a dispute resolution in many ways and this include promoting international trade, adopting the social model role as well as increase in trade growth, and increase in the GDP globally.