Osinbajo Has Notified Buhari Of His Presidential Ambition – Sources 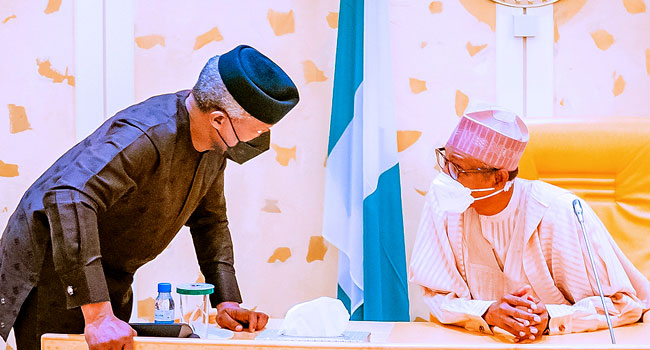 The Vice President of Nigeria, Prof Yemi Osinbajo has finally informed President Muhammadu Buhari of his presidential ambition, according to credible sources.

The sources said the VP told the president of his desire to take over from him at the expiration of his tenure in 2023 to consolidate the achievements they recorded since they took over from the opposition PDP in 2015.

With the intent, which had not been made public, the vice president will struggle for the ticket of the ruling All Progressives Congress (APC) with the likes of Asiwaju Bola Ahmed Tinubu who had a few months ago visited the Presidential Villa where he told Buhari of his intention to succeed him.

There are reports that the Minister of Transportation, Rotimi Amaechi, the CBN Governor, Godwin Emefiele and the Ekiti State Governor, Kayode Fayemi would also vie for the presidency even as the Minister of Labour, Chris Ngige had said he would soon join the race.

Senate Chief Whip, Orji Uzo Kalu, and Senator Rochas Okorocha have all declared their interest in the presidency on the platform of the APC amid speculations that some aspirants from the North would soon join the race.

“Certainly, VP Osinbajo has told the president that he wants to succeed him,” one of our sources said.

“They told him not to allow a third party to tell the president so that the ambition will not be misconstrued,” he said.

Another source said when Osinbajo approached the president with the story, Buhari was not surprised.

“Buhari smiled in his usual characteristic manner…he listened to the VP carefully and while responding, he gave him the green light and wished him well without giving him any commitment or assurance of supporting him ahead of other contenders.

“He blessed the intention just the way he blessed Tinubu when he visited him in the Villa and unveiled his plan to vie for the presidency.

“And I think the president is being careful. Remember what he said while granting an interview to a national television.”

Though Osinbajo, a lawyer, politician and pastor, is yet to declare his intention to run for the office of president in 2023, many support groups and individuals have sprung up rooting for him.

The groups have been going round the country and sponsoring adverts in print and broadcast media urging the vice president to contest.

Another source said recent happenings indicated that Osinbajo will “Definitely slug it out with Tinubu and others for the APC ticket.”

He said, “The projection in certain quarters that the VP will not contest against Tinubu is now over. The two of them who are from the South West would confront each other. They both have their support bases but Tinubu, of course, is more of a politician than Osinbajo. He has more support base across the country but that notwithstanding, the truth is that whoever the president supports would surely have an upper hand,” he said.

Sagay: Atiku Should Retire From Politics, Play Role Of An Elder Statesman