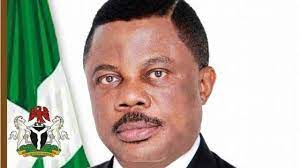 The former governor of Anambra State, Willie Obiano, may soon regain his freedom from the custody of the Economic and Financial Crimes Commission.

A source that the former governor has met the administrative bail conditions given to him by the anti-graft agency.

A senior official at the commission said that a thorough verification of some of the documents Obiano submitted in fulfilment of the bail terms were being carried out by operatives of the commission.

It was gathered that the former governor had been ordered to produce two directors on grade level 17 in the Federal Civil service as one of his bail conditions.

Another condition is that the two Federal directors must be landlords in Maitama, Asokoro or the Wuse district of Abuja.

Obiano was last Thursday arrested at the Murtala Muhammed International Airport, Lagos while trying to board a flight to Texas, United States.

The EFCC had in November last year placed the former governor on a watchlist.

In a letter to the Comptroller General of the Nigeria Immigration Service dated November 15, 2021, the Commission requested the Service to place the governor on a watchlist and inform it anytime he is traveling out of the country from any of the International airports and other points of entry and exit.

The former governor was arrested for misappropriating N5bn Sure-P and N37 billion security vote funds, which were withdrawn in cash.

Part of the funds was also allegedly diverted to finance political activities in the state.