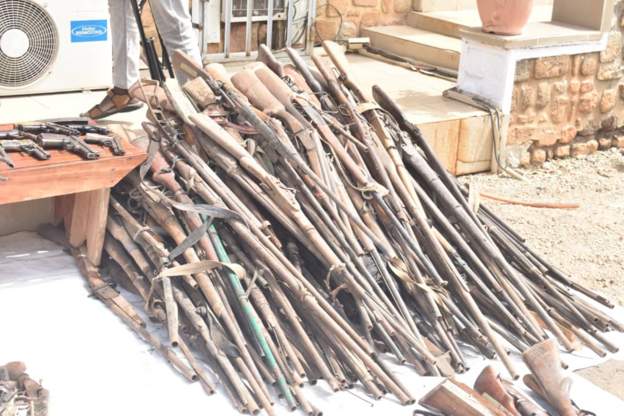 The Nigerian military says it has seized more than 500 illegal guns from civilians in the central state of Plateau.

The 517 weapons, including AK-47s, pistols and locally made guns, were handed over by a military commander at a ceremony in Jos, the state capital, on Thursday.

They were seized over the last two years from criminals including armed robbers and gangs that have been kidnapping people for ransom.

Some were seized in parts of neighbouring Bauchi and Kaduna state. A number of people were also arrested.

Some estimates indicate there were around 6.5 million small arms and light weapons in circulation in Nigeria last year – about 90% in the hands of non-state actors.

This makes armed conflicts more difficult to tackle in the country, analysts say.

But the Nigerian authorities say they are now trying to retrieve such weapons from civilians and control their proliferation.

Nigeria is struggling to tackle various forms of armed violence – a deadly insurgency by jihadist groups Boko Haram and the Islamic State and a worsening spate of killings and kidnappings for ransom by armed gangs locally known as bandits.

Plateau state in particular has experienced frequent communal conflicts in the past two decades as well as gang violence resulting in thousands of deaths and massive displacement of people.