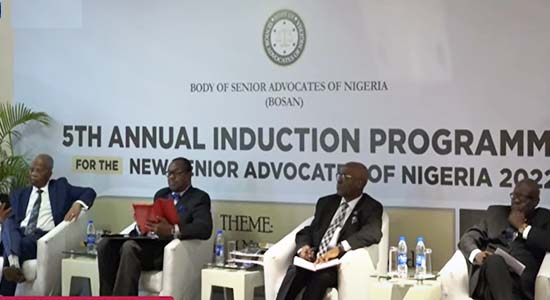 62 qualified candidates for the SAN rank were inducted on Saturday by the Body of Senior Advocates of Nigeria (BOSAN), who also urged them to be conscious of their mentorship responsibilities.

The ceremony, which took place in Lagos, was the fourth of its sort since it began in 2018, and it followed the custom of accrediting the new inductees with their new leadership roles by a body of senior members of the bench and the inner Bar.

Senior members of the bench and inner bar gave the new inductees a charge to uphold the ethical standards of the profession, retain the dignity of the rank, live up to their mentorship roles, and maintain their integrity.

Retired Justice of the Court Appeal, Hon. Justice Mojeed Owoade Rtd, said, it is necessary for the new SANs to keep their integrity.

Also, Oluyemesi Bamgbose SAN urged inductees especially academic SANs to improve on their mode of teaching and researching to be more beneficial to the other members of the legal profession now that they have attained the rain if Senior Advocates.

“When you are made a Senior Advocate of Nigeria especially in the academic category, the way you used to teach before, you are not the same again. You are a new wine.

“There’s a new bottle. So, the way you used to do your research is not for yourself now, but it is to enhance the legal practice”, she said.

The ceremony witnessed discussions on topics such as Legal Ethics and Professionalism, Understanding the Culture and Demands of Continuous Excellence as well as Regulation of Senior Advocates and their Duties to the Courts, Bar and the Society.

Remarking on the importance of adhering to required ethical standards and charging new inductees to do so, Secretary of BOSAN, Seyi Sowemimo, said, “As leaders of the noble profession, they are to ensure that they wear the rank with the kind of dignity and honor that it truly deserves.”

Speaking on what is expected of a new SAN, one of the new inductees, Admson Adegoro noted that, “As a Senior Advocate of Nigeria, you need to be more responsible.

“You are at this stage an elder in the legal profession. So, much would be expected from you and I can tell you that we are up to the task.”

53 and 9 academicians constitutes the 62 SAN designate who were chosen from among the 129 selected applicants and announced in June 2022.

The 62 SAN designates are expected to receive their official rank awards on November 28th, 2022.