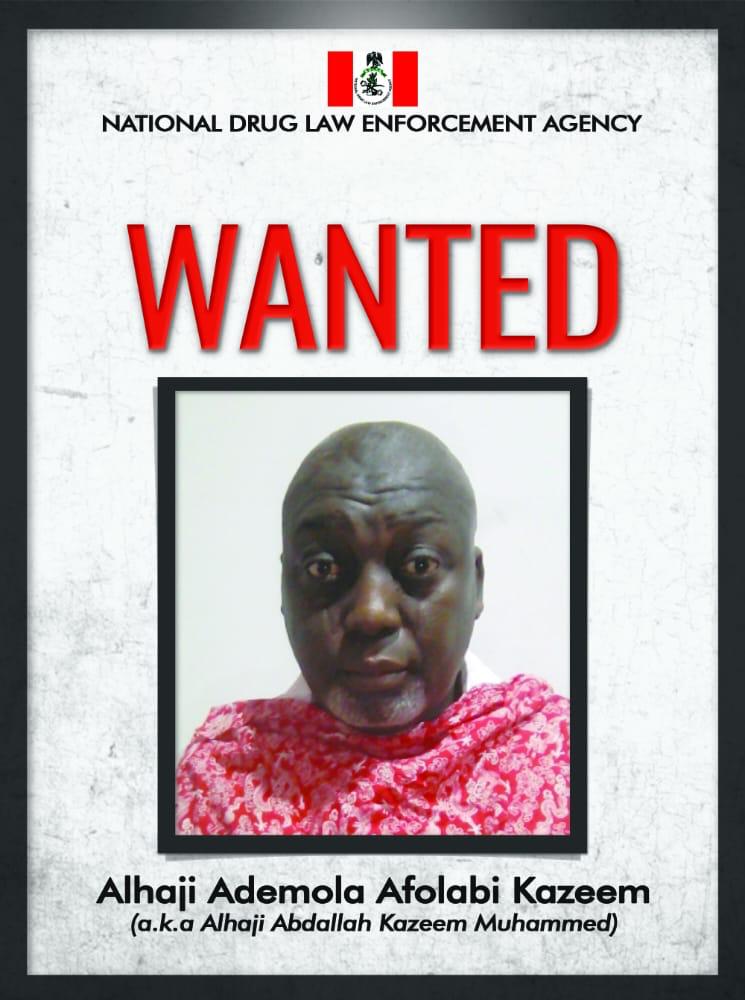 The decision to declare the suspect wanted followed his failure to honour NDLEA invitations and an order granted the Agency by a Federal High Court in Lagos on Monday 17th October 2022. The wanted drug kingpin was uncovered as the sponsor of sorne traffickers arrested by the anti-narcotics agency in their recent attempt to export cocaine to Dubai, UAE and other destinations outside Nigeria.
Soon after the arrest of one of his mules, Bolujoko Muyiwa BabaIola, a Lagos BRT driver on 27th June at the Murtala Muhammed International Airport, MMIA, lkeja, Alhaji Ademola Kazeem who is also the Chairman of Adekaz Global Integrated Services, went underground. Following his failure to honour invitations sent to him, the Agency approached a Federal High Court in Lagos with three prayers: to attach and seal his identified properties in Lagos and lbadan; declare him wanted and block his bank account with a cash balance of Two Hundred and Seventeen Million Naira (N217,000,000.00), all of which were granted.

In a related development, the Agency on Friday 28. October arrested another drug baron, Udemezue Obunike William at the Nnamdi Azikiwe International Airport Abuja on his return from Brazil. His arrest with the support of the Nigeria Immigration Service followed the earlier arrest of some drug couriers linked to Udemezue as their sponsor. They include two mules: Messrs Adolphus Anayochukwu Okeke and Anayo Michael Nnanna. The 52-year-old father of four children who claimed to be a businessman, Okeke Adolphus Anayochukwu was arrested at the Abuja airport by NDLEA operatives with 20.75 kilograms of black liquid cocaine on Tuesday 15th March upon his arrival onboard Qatar Airways flight from Sao Paulo, Brazil through Doha, Qatar to Abuja.

The liquid was discovered upon search of his luggage stuffed with six smaller bags containing 32-makeup mascara, which tested positive to cocaine.

On the other hand, a Brazilian returnee Nnanna Anayo Michael, 39, was arrested at the Port Harcourt International Airport, PHIA, during the inward screening of passengers on board Qatar Airline flight QR1433 from Sao Paulo, Brazil via Doha to Port Harcourt on Tuesday, 29th March. Nnanna was arrested with 73 sachets weighing 8.15 kilograms of cocaine, which is the largest seizure of such at the airport, since it began

international flight operations years ago.
Further investigations of the two traffickers revealed Udemezue Obunike William as the drug baron behind the cocaine cartel. As a result, he was watch-listed and arrested upon his return from Brazil on Friday 28th October.
In his reaction, Chairman/Chief Executive of NDLEA, Brig. Gen. Mohamed Buba Marwa (Retd), CON, OFR, commended the officers and men of the Agency involved in the clinical investigation that led to the unmasking of the two barons. He said gone are the days when drug kingpins can hide behind traffickers and remain faceless, warning that the new NDLEA will continue to unravel them one after the other if they fail to back out of the criminal trade.