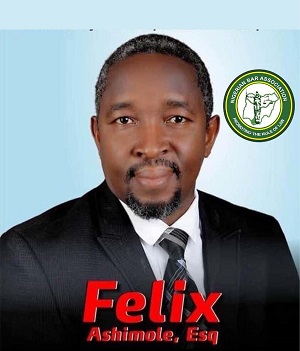 An Abuja-based lawyer, Felix Ashimole, popularly known as Che Oyinatumba, has said he is weighing his options following the affirmation of his disqualification by the Appeals Committee of the Electoral Committee of the Nigerian Bar Association (ECNBA) for the 2022 national elections.

Ashimole was an aspirant for the post of Publicity Secretary.

The Committee, in a statement on June 12, affirmed his disqualification by the ECNBA.

It said, among others, that the inability of Ashimole’s nominator to provide certain documents required to qualify him as a candidate was fatal to his aspiration to join the NBA National Executive Council.

The appellant was disqualified by the ECNBA via a notice of disqualification dated May 20, 2022, on the ground that his nominator, Mr. Mohammed Iyorember Tsav, did not attach his Branch Dues receipt for 2021.

Dissatisfied, Ashimole appealed via a May 29, 2022 email.

Ashimole observed among others that the ECNBA disqualified him for a position he never applied for. He noted that its letter referred to him as a contestant for the office of Assistant Publicity Secretary instead of the position of Publicity Secretary.

But upholding the disqualification, the NBA Appeals Tribunal held that participation in NBA Election as a nominator is a privilege contingent on payment of branch dues, and a nomination cannot be valid in the absence of such.

It affirmed its positions in similar cases that the inability of the aspirant’s nominator to provide the required documents dealt a fatal blow to his aspiration to join the NBA National Executive Council.

The Appeals Committee decision, seen by The Nation, reads in part: “Since there was no evidence before this committee by the petitioner of attachment of payment receipt by Mr. Mohammed Iyorember Tsav of the 2021 Branch Dues, to the Appellant’s nomination form, which is a prerequisite for a valid nomination, the decision of the ECNBA to disqualify him was in order and validly made.”

It said Ashimole’s “attempt to make a heavy weather out of a correspondence exchanged between him and the ECNBA, wherein he was mistakenly referred to as a contestant for the office of Assistant Publicity Secretary instead of the position of Publicity Secretary he applied for, was a non issue” describing it as “a minor error, which did not affect the decision of the ECNBA to disqualify him.”

It added further: “Therefore, this appeal lacks merit and ought to be dismissed and it is accordingly dismissed.”

The decision was signed by Mrs. Olufunmilayo Roberts and Mr. Augustine Ajineh, the committee’s Chairman and Secretary respectively. Reaponding to the decision in a statement on his Facebook page, Ashimole hinted a law suit.

“I find this highly interesting and I am in consultation with my team and before the next working day, Tuesday (today) within hours acceptable by FCT Hight Court to accept fresh processes, I will make a statement,” he said.