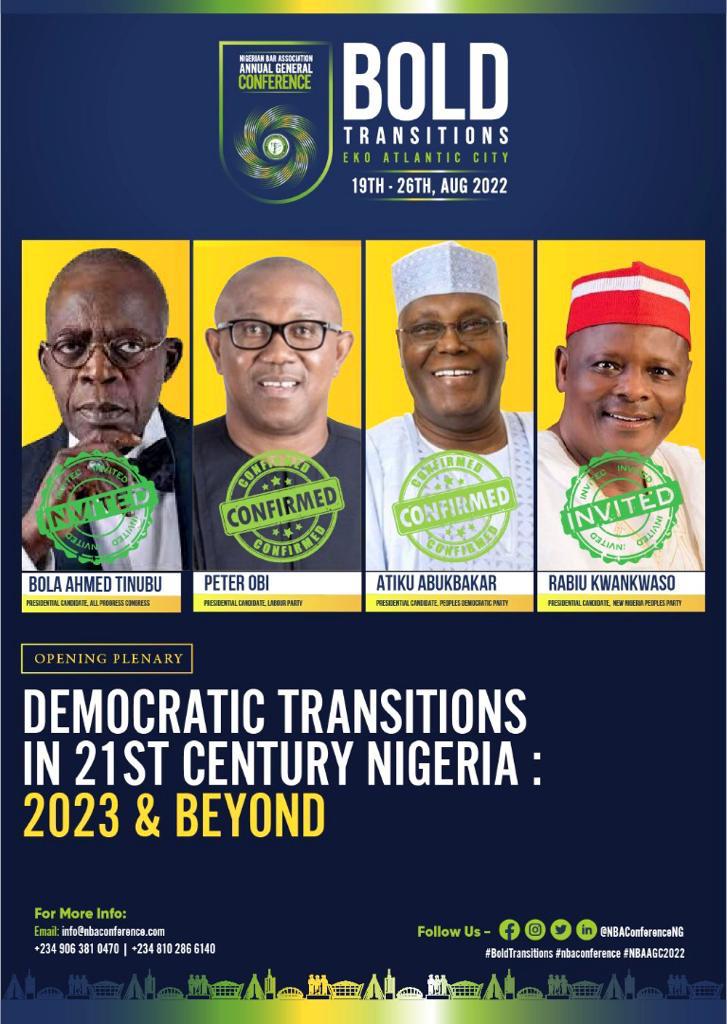 Two of the four leading candidates in Nigeria’s 2023 presidential race have confirmed their availability to speak at the forthcoming Annual General Conference of the Nigerian Bar Association (NBA) in Lagos this month.

Tobenna Erojikwe, chairman, Technical Committee on Conference Planning (TCCP), who disclosed this, said invites had been sent out to the other two candidates, Bola Ahmed Tinubu of the All Progressives Congress (APC) and Rabiu Musa Kwankwaso of the New Nigeria People’s Party (NNPP), but they were yet to confirm their availability.

Erojikwe said the Presidential Candidates’ session will come after the conference opening ceremony and will afford participants a rare opportunity to interact with the presidential candidates just six months ahead of Nigeria’s general elections next year.

“We are excited to announce that of the four leading presidential candidates we sent invites to, two have confirmed to us that they would be available to speak at the 62nd NBA Annual General Conference holding at the Eko Atlantic City in Lagos. We await a response from the other two and we are hopeful that it would be positive,” Erojikwe said.

“It is a first in the history of the NBA Annual General Conference and it is in line with our aspiration to make the 2022 AGC a legacy conference that sets a standard that will become a benchmark for subsequent conferences of the NBA. We are looking forward to seeing participants have a robust engagement with the candidates,” he said.

The 2022 NBA Annual General Conference, with the theme “Bold Transitions”, will hold at the Eko Atlantic City in Lagos from 19th to 26th August, 2022.